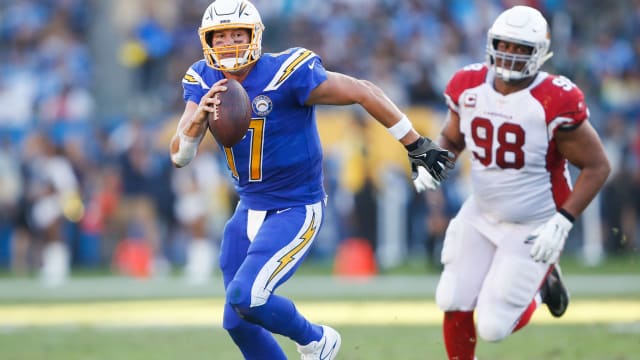 The wildcard race in the AFC is taking shape after two big wins from the Los Angeles Chargers and Baltimore Ravens, but a Colts victory keeps Indianapolis in the hunt.

Los Angeles used the arm of Philip Rivers to bolster their lead over the lowly Arizona Cardinals. The 15-year veteran had a record-setting performance as he opened the game with 25 consecutive completions. He went on to lead the Chargers to a 45-10 win behind another NFL record. Rivers finished with the highest completion rate (96.6 per cent) in a single game in league history. He also had 259 yards and three touchdowns to boot.

The win all but secures one of the two wildcard spots for LA. While it is unlikely the Chargers will catch the AFC-West leading Kansas City Chiefs, who they still have to face in the coming weeks, they will most likely be able to hold on to their lead in this race with a manageable schedule to end the season.

In Baltimore, things were not so certain for the Ravens – until a breakout second half that led to their 34-17 victory over the Oakland Raiders. The struggling Raiders put up a fight in the first half and entered the break trailing 13-10. The game remained close through the third quarter when Ravens quarterback Lamar Jackson and Raiders signal caller Derek Carr traded touchdowns. But, Baltimore scored 14 unanswered points to eventually top Oakland.

One of the big questions surrounding the Ravens' playoff potential is who will play under center as the season winds down. Jackson has had two standout games in place of an injured Joe Flacco, but coach John Harbaugh is not willing to say if it is enough for the starting nod when Flacco returns. Baltimore will need some big performances from whoever starts under center to stay in this race, as teams like the Colts are knocking on the door.

Indianapolis used a last-second field goal to inch ahead of the visiting Miami Dolphins 27-24. The Colts move to 6-5 to match Baltimore and remain ahead of Miami, Tennessee and Cincinnati.

Vinatieri. For. The. WIN! #Coltspic.twitter.com/WOBC0iNINR

Panthers cornerback Donte Jackson went down with a quad injury against the Seahawks and was later ruled out for the remainder of the game.

Two Jaguars left the matchup against the Bills with injuries. Guard Andrew Norwell suffered an ankle injury in the second half and did not return, while long snapper Matt Overton exited with a shoulder injury.

Bengals quarterback Andy Dalton sustained a thumb injury against the Browns and did not return. Cincinnati cornerback Tony McRae suffered a concussion in the third quarter and was carted off the field.

Steelers outside linebacker T.J. Watt hurt his right wrist early in the second quarter against the Broncos. Watt went to the locker room for further evaluation, but was able to return to the game.

Giants rookie Saquon Barkley is breaking all kinds of records. On Sunday, he scored his 11th touchdown to inch closer to the team's rookie record set by Odell Beckham Jr. and Bill Paschal. Barkley did match a record set by Adrian Peterson in 2007 when he recorded his third 50-yard rushing score.

Panthers quarterback Cam Newton was perfect through the first half against the Seahawks, throwing his first incompletion of the game with his first pass of the third quarter. However, he followed that up with a 26-yard carry for a first down.

Tom Brady reached another milestone as he surpassed Peyton Manning for the most total passing yards in NFL history.

Another quarterback made waves. Jackson, who got his second consecutive start, now has 190 rushing yards in his last two appearances. It is the most through any quarterback's first two starts in the Super Bowl Era.

A brawl ensued when the Bills faced the Jaguars, and two players were ejected. Jacksonville running back Leonard Fournette and Buffalo defensive end Shaq Lawson went at it, throwing punches before getting sent to the locker rooms. Bills coach Sean McDermott was happy with the way the team responded to the ejections, securing a 24-21 win: "I've already sat down with Shaq, and we do things the right way, but when people stand up and challenge us, I don't expect us to back down."

The Eagles were 0-2 after their bye week, but broke their losing skid with a late field goal in the fourth quarter against the Giants. The 25-22 victory was just what coach Doug Pederson wanted to see: "It's still right there in front of us."