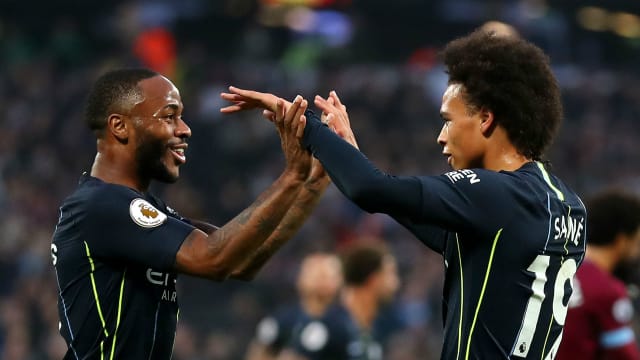 Manchester City stormed to a 4-0 victory at London Stadium as West Ham boss Manuel Pellegrini endured an unhappy reunion with his former employers.

Pellegrini masterminded City's 2013-14 Premier League title triumph and one of the heroes of that campaign, David Silva, opened the scoring in the 11th minute – the evergreen playmaker's fourth in as many matches.

Raheem Sterling, who Pellegrini made City's record signing in 2015, scored the second before turning provider for Leroy Sane to put the game beyond the Hammers in the 34th minute.

West Ham enjoyed their share of chances and Michail Antonio struck the post after half-time, before Sane blasted past Aaron Cresswell's best efforts on the line in the game's final act.

As in the 3-1 derby win over Manchester United last time out, Silva was on hand to find the breakthrough – deftly touching home Sterling's deflected cross at the near post having fired an earlier chance into the side netting.

West Ham had made an enterprising start but were left with a mountain to climb in the 19th minute, as Sane gained the yard of space he required around the outside of Pablo Zabaleta and crossed for Sterling to tap in.

The hosts continued to pose questions of Aymeric Laporte and Nicolas Otamendi at the heart of the champions' defence, with Marko Arnautovic and Antonio forcing goalkeeper Ederson into action.

Issa Diop made a superb last-ditch challenge to frustrate Sane but the Germany winger then left his centre-back partner Fabian Balbuena sprawled on his back as he coolly converted Sterling's pass.

Antonio's profligacy remained a theme after the break when he powered past Fabian Delph but drilled against the base of the near post.

Arnautovic hobbled off before the end with an apparent knee problem - arguably a far greater concern for West Ham than Sane clattering into the bottom corner in stoppage time.

What does it mean? City threatening to crush the competition

Liverpool's 3-0 win at Watford which means City's lead at the summit remains a mere two points. But they look ominous in this mood and, for now, the chasing pack need to hang in there and wait for the champions' level to drop. West Ham have only won one of their last six but comparable efforts in their forthcoming games will surely improve on that return.

Given his persistent brilliance since joining City from Valencia in 2010, suggesting Silva is playing the best football of his career is not a statement to make lightly. But the way he weaves silken threads through all the best work Pep Guardiola's team produce – few players have ever felt so purpose-built for the Catalan's approach – is truly something to behold. A relative weakness in front of goal has generally been Silva's weakness throughout a decorated career. He now has five in City's past six matches and eight for the season.

Masuaku must do better

West Ham causing frequent discomfort for City, only to find themselves 3-0 down before the break, demonstrated how fine the margins are against the league leaders. Unfortunately for his tireless team-mates, the lackadaisical display left-back Arthur Masuaku turned in was a recipe for trouble. A moment's hesitation allowed Sterling to nip in for number two, while life was far too easy for the England winger when it came to setting up Sane's goal.

City will look to avenge their only defeat of the season against Lyon in the Champions League on Tuesday. They entertain Bournemouth next weekend, when West Ham will target a return to winning ways at Newcastle United.

Sexton: The Farrells have admirable ability to set aside father-son relationship