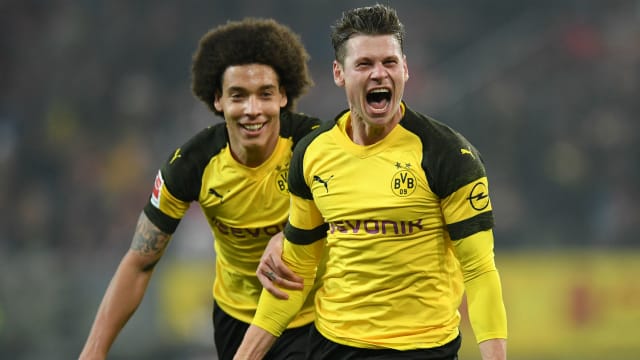 Lukasz Piszczek scored an impressive late winner as Borussia Dortmund earned a thrilling 2-1 win at Mainz to extend their lead at the top of the Bundesliga.

The win stretched Dortmund's advantage at the summit to seven points, with closest challengers Borussia Monchengladbach not in action until Sunday when they face Hannover.

Dortmund dominated the first-half possession and made the brighter start, Dan-Axel Zagadou's header saved by Robin Zentner shortly before Marco Reus was narrowly wide with another aerial effort.

Axel Witsel had a strike well tipped over for the visitors, before Jean-Philippe Mateta's chip was kept out by an onrushing Roman Burki at the other end.

Mainz started brightly after the break with Mateta's blocked shot drifting just wide before Danny Latza fired a threatening effort into the side netting.

But Paco Alcacer, for whom Dortmund activated their option to sign him permanently from Barcelona on Friday, came on for Mario Gotze after 64 minutes and scored his ninth Bundesliga goal of the season exactly two-and-a-half minutes later to cap a superb counterattack.

Why would you start him? pic.twitter.com/2Ye0dN2E81

The Spain striker tapped in after Jadon Sancho's impressive throughball found Reus, whose cut-back laid it on a plate for him.

Mainz made a quick response, Alexander Hack's pass deflecting off Witsel into the path of Robin Quaison to slot a first-time finish under Burki with 20 minutes remaining, his first league goal of the season.

But the decisive blow came with 14 minutes remaining as Piszczek netted his first Bundesliga goal since February 2017. After seeing his initial effort blocked, the defender curled a magnificent effort in off the bar from 18 yards to maintain Lucien Favre's side's momentum.

Dortmund's battling victory gained further in significance as rivals Bayern Munich were pegged back in a 3-3 home draw against Dusseldorf, leaving them nine points off the pace.