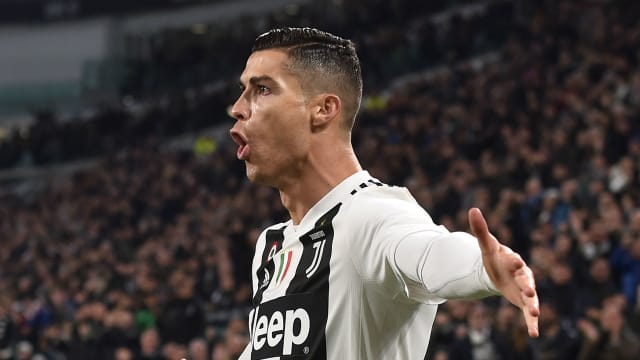 Cristiano Ronaldo made it six goals in as many Serie A games on Saturday as Juventus beat SPAL 2-0 to move nine points clear at the top of the table.

The five-time Ballon d'Or winner beat SPAL goalkeeper Alfred Gomis from six yards in the 28th minute at the Allianz Stadium – his ninth league strike for the Bianconeri.

Douglas Costa – one of six changes for Juve – impressed throughout for the league leaders, creating numerous openings that the hosts, including Ronaldo, were unable to convert.

Mario Mandzukic finally doubled Juve's advantage on the hour, the Croatia international sealing all three points with a simple tap-in after Costa's shot had stung the palms of Gomis.

9 - Prior to Cristiano Ronaldo, the last Juventus player able to score nine goals in his first Serie A season after MD13 was Pietro Anastasi in 1968/69. Historical. #JuveSPAL

Juve thought they had the game's opening goal after 11 minutes when a shambolic SPAL goal kick resulted in Felipe bundling a Costa cross into his own goal, but the visitors were spared as Gomis' initial kick had not exited the area before being played.

The impressive Costa went close with two efforts of his own in quick succession soon after, but his radar was slightly off from distance.

Ronaldo was much more clinical from six yards just before the half hour, though, the Portugal international timing his run perfectly to beat the offside trap and tap home Miralem Pjanic's free-kick.

Juve and Ronaldo should have doubled their tally early in the second half but somehow he failed to convert from a yard out, the ball dropping to him after Costa's shot had thudded against the post.

Costa's next involvement brought the second goal, his shot too hot for Gomis to hold and Mandzukic made no mistake from close range.

Ronaldo's quest for a second goal brought a fine late save from Gomis before an acrobatic bicycle kick sailed over, but it mattered little as Juve eased to ninth home league match without defeat.

What does it mean? Perfect preparation for Valencia

With Juve only needing a point from this week's Champions League clash with Valencia to qualify for the knockout stages, the chance to rest a host of stars will have been welcomed by Allegri.

The Juve boss was able to leave Paulo Dybala and Wojciech Szczesny on the bench to ensure they are fresh on Tuesday, while Giorgio Chiellini and Blaise Matuidi only made late cameos.

Once again, when Ronaldo scores Juve win. Saturday's strike was the forward's ninth in Serie A and they have helped earn the Bianconeri 10 points – a better contribution than any other player in the top flight.

Only two sides have scored fewer goals than SPAL this season and for the fifth time in 2018-19 Leonardo Semplici's men failed to fire. After 13 games they have only scored 11 times, not a record to be proud of.

Juve return to European action knowing a draw is enough to secure a top-two spot in Group H, while SPAL's next fixture sees them host Empoli in Serie A next weekend.