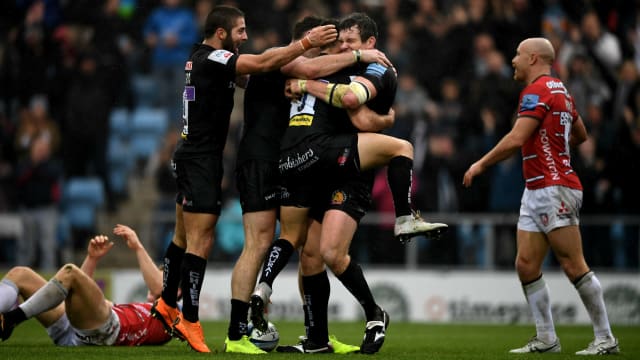 Exeter Chiefs maintained their 100 per cent record in the Premiership with a 23-6 victory over Gloucester, while Harry Thacker's second-half hat-trick was not quite enough for Bristol Bears as they went down 32-28 to Wasps in a dramatic encounter at the Ricoh Arena.

The Chiefs are one of two sides, along with reigning champions Saracens, to have won all of their league games this term and claimed victory number eight with relative ease at Sandy Park on Saturday.

Saracens will look to respond to Exeter's latest win on Sunday when they visit Leicester Tigers.

Wasps looked set to record a thumping victory over Bristol when they opened up a 32-7 lead early in the second period.

However, Bears hooker Thacker then claimed tries in the 57th, 61st and 73rd minutes - all of which were converted - to set up a grandstand finale.

Bristol were unable to find another score that would have given them victory, but did at least claim a bonus point as Wasps held on to move up to third.

That winning buzz is back @WaspsRugby - but only just

What an incredible second-half effort from @BristolBears, with hooker @harry_thacker bagging a hat-trick inside 25 minutes

But Dai Young's men held on for a welcome #GallagherPrem win #WASvBRIpic.twitter.com/a5eRwAc6J9

Sale Sharks climbed off the foot of the table, leapfrogging Bristol and Newcastle Falcons with an 18-13 triumph over Northampton Saints.

Two tries from Denny Solomona proved vital after Cobus Reinach and Ollie Sleightholme had gone over for Northampton.