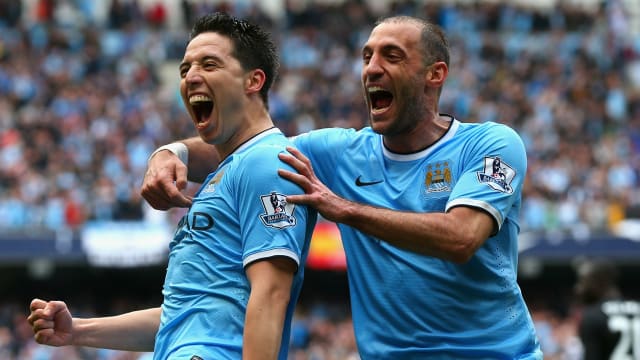 Samir Nasri's quality would be a welcome addition to the West Ham squad, according to Pablo Zabaleta.

Former France international Nasri has been training with the Hammers in a bid to improve his fitness and earn a contract through to the end of the season.

Nasri last played a competitive fixture almost a year ago, in the Turkish Super Lig for Antalyaspor, and is preparing to return from a doping ban after he received a drip treatment at a Los Angeles clinic in 2016 while on loan at Sevilla.

An appeal against the initial sanction by UEFA's ethics and disciplinary inspector resulted in an extended suspension in August, which was backdated to July 1 last year, meaning he was unable to train with a professional club until the start of November.

Nasri could be set for a reunion with former Manchester City manager Manuel Pellegrini, and Zabaleta, who played alongside the Frenchman for six years at the Etihad Stadium, would welcome his old team-mate with open arms should he earn himself a deal.

"Manuel knows Samir very well from his time at Manchester City," Zabaleta told Sky Sports, ahead of the Hammers' home fixture with the Premier League champions on Saturday.

"We need players with his quality, especially because also we lost two key players who brought quality into this team – Manuel Lanzini in the summer before the World Cup and then [Jack] Wilshere, who is very close to coming back to the team.

"On the ball [Nasri] is fantastic. He is one of those players who can give to the team some possession and play between the lines to help the attacking players to create chances.

"Samir needs a bit of time. He has not been football training for more than a year but sometimes those players are technically very good so he probably needs to focus more on his fitness levels than his passing and all this.

"We know Samir and his quality. When he is fit he is on a different level. He is a fantastic player.

"Hopefully he can reach his best fitness level. He has to feel physically good because we know that the Premier League is so demanding physically."