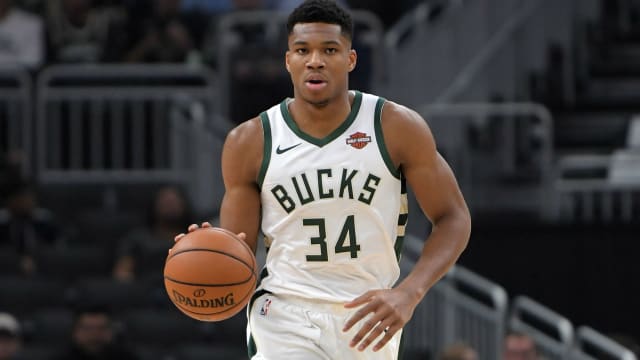 The Trail Blazers are among the best in the West, but against the Milwaukee Bucks – the second best team in the East – Portland certainly did not show it.

The Blazers' short win streak was spoiled by a 143-100 loss to the Bucks on Wednesday.

Milwaukee's efforts were led by Giannis Antetokounmpo, who scored 33 points and added 16 rebounds for a double-double. Khris Middleton pitched in 21 points, and both Eric Bledsoe and Malcolm Brogdon netted 16.

For Portland, CJ McCollum and Damian Lillard led the team with 22 points apiece. Jusuf Nurkic was the only other Blazer to score in double digits. He finished with 16 points. The loss was the largest by a conference leader since the East and West conferences were established in 1970-71.

The outcome has big consequences for both teams. The Bucks (13-4) inch closer to the Toronto Raptors, who are atop the standings with a 14-4 record after a 124-108 win over the Atlanta Hawks, and the Blazers (12-6) have been passed by the 12-5 Grizzlies.

The Grizzles took advantage of the Blazers' worst loss of the season and used Mike Conley's 30-point night for their fifth consecutive win to move ahead of both Portland and Golden State.

The Warriors slumped to a fourth straight loss with a 123-95 defeat to the Oklahoma City Thunder.

The 76ers remain undefeated at home after a narrow 121-120 victory over the Pelicans. In Philadelphia's efforts to move to 10-0 at Wells Fargo Center, Joel Embiid scored a game-high 31 points. He finished with a double-double after grabbing 19 rebounds – 14 on the defensive end – and had a pair of assists and blocks by the night's end.

Despite the loss, Anthony Davis scored 12 points to put his career total just above 10,000. He became the eighth-youngest player in NBA history to reach the milestone, and accomplished the feat with the likes of LeBron James, Kevin Durant, Kobe Bryant, Carmelo Anthony, Tracy McGrady, Dwight Howard and Bob McAdoo – the only other players to do so at a younger age.

With this bucket, Anthony Davis has scored 10,000 career points for the @PelicansNBA! #DoItBig#ThisIsWhyWePlaypic.twitter.com/kRUHrih2ZJ

Portland did not receive much help from two of their starters. Jake Layman made just one shot and only played nine minutes. However, with more time, Al-Farouq Aminu did not do any better. He finished with four points thanks to a one-for-13 shooting night to go with a pair of free throws.

How else should a player reach the 25,000-career point milestone? With a dunk, of course. At least that is what Hawks veteran guard Vince Carter did to become only the 22nd player to complete the feat.

With the slam, Vince Carter is the 22nd player in @NBAHistory to surpass 25,000 career points!#TrueToAtlanta#ThisIsWhyWePlaypic.twitter.com/J4ljvBwa4O

The Lakers-Cavaliers matchup came down to the final seconds. But, LeBron James' return was not spoiled, thanks to some late defensive help from JaVale McGee.

On the heels of the loss to the Bucks for the Blazers, Friday's matchup between two of the top teams in the West will be interesting to say the least. The Blazers are barely above .500 (5-4) on the road, and it will take the efforts from all of Portland's starting five for the Blazers to get back to their winning ways.