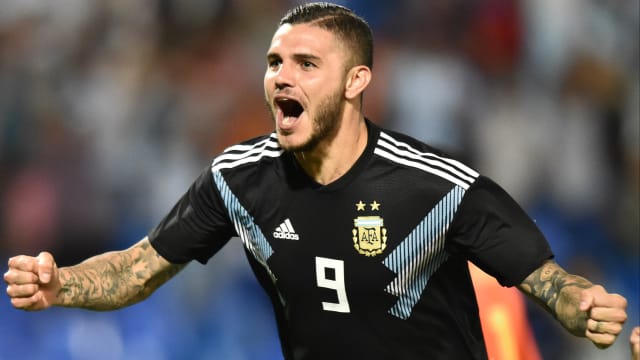 Mauro Icardi and Paulo Dybala ended their waits for first international goals to help Argentina to a 2-0 win over Mexico in a friendly on Tuesday.

Icardi scored in the second minute in Mendoza and Dybala sealed the win as Argentina made it back-to-back victories against Mexico this month.

Playing his eighth international game, Icardi broke his duck early, while Dybala came off the bench to net his first in 18 Argentina appearances.

Since the World Cup and with Scaloni at the helm on an interim basis, Argentina have won four of six matches, losing just once – to Brazil last month, and have done so without Lionel Messi.

Despite a much-changed line-up, Argentina were ahead inside two minutes.

Icardi did well to cushion down a long pass to Erik Lamela, who played in the Inter star before the forward cut inside and finished clinically for his first international goal.

Victor Guzman put a 25-yard free-kick over the crossbar approaching half-time, although Argentina were looking the far more likely.

Lamela stung the palms of Mexico goalkeeper Jose de Jesus Corona with a free-kick early in the second half as the hosts looked to double their lead.

The visitors went close in the 69th minute, with debutant goalkeeper Paulo Gazzaniga making a good save to tip away a Jesus Gallardo header at the back post.

Guzman tested Gazzaniga again in the 85th minute, but Argentina sealed their win on the counter-attack.

Giovanni Simeone made a blistering run down the left before squaring for Dybala, who side-footed in his maiden international goal.

What does it mean? Scaloni may have done enough

Already backed by his players, including Dybala, this month, Scaloni is likely to have done enough to be given the permanent job as Argentina coach. The 40-year-old has enjoyed some success while rebuilding and his side's recent performances suggest he deserves a chance.

The 25-year-old has been prolific for Inter in recent seasons, but is yet to deliver regularly for Argentina. Icardi took a step towards changing that by finally scoring for his country, the goal showing what he can produce. But Scaloni will eventually have to work out how Icardi and maybe Messi and Dybala can fit together.

Albeit with an understrength side, Mexico's difficult period continued with a seventh loss in their past eight games, and fifth in six under interim boss Ricardo Ferretti. Gerardo Martino is widely expected to take charge and it seems Mexico cannot wait for the arrival of the former Barcelona coach.

Argentina have a Copa America, and perhaps the return of Messi, to look forward to in 2019. Mexico, meanwhile, will go into the CONCACAF Gold Cup as one of the favourites despite their poor form.