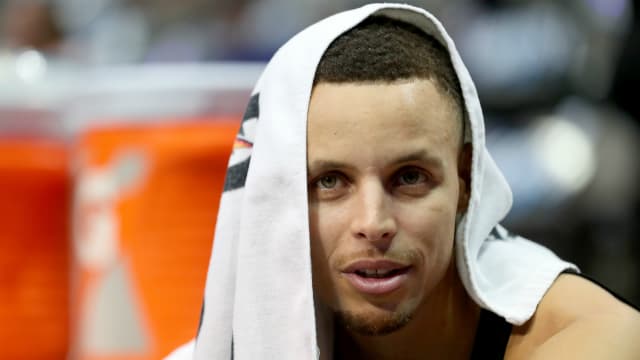 Stephen Curry is optimistic his injury recovery is going well, but vowed to stay cautious and remains unable to pinpoint exactly when he will return to the court.

The Golden State Warriors star has missed the last five matches with a groin strain and will also be absent when the defending NBA champions take on the San Antonio Spurs on Sunday.

Curry is back doing individual drills and will be re-evaluated in around a week, the Warriors having lost three of their last four matches with the two-time league MVP absent.

"Progress is moving in the right direction," Curry told ESPN just before his side lost to the Dallas Mavericks on Saturday.

"[I] haven't had any setbacks or anything like that. But it's more so about getting full range of motion, doing so where it's pain-free and things like that.

"I'm learning about this one. I can tell you everything you want to know about ankles. But this is obviously a new one for me, so trying to make sure I stay cautious, but knowing that we're moving in the right direction.

"So I don't know how long it will be, but that's all I can pretty much ask for."

Curry, speaking for the first time since the injury he sustained against the Milwaukee Bucks, said he never enjoys being on the sidelines, especially at a time where his team could use his leadership given the recent clash between Draymond Green and Kevin Durant.

The 30-year-old added: "It's tough because I want to be there with my brothers in terms of when stuff goes down.

"Win, lose or draw, I want to be there to experience it all. Injuries are tough, and they're part of the game, I know that's obviously the reason I wasn't there, but at the end of the day, the way that we've responded and moved forward - [I] can't be more proud of how we handled that.

"It's been different, it's been tough. Obviously it sucks not being able to play. It sucks when you're not with the team when something like that happens.

"But I think the way we've handled it as a team, the way Draymond's handled it, the way KD's handled it, it's been nothing but professionalism and understanding that it's about the team.

"We have the opportunity to do something extremely special this year. There's going to be ups and downs and bumps in the road, whether it's self-inflicted or whether it's from outside. And at the end of the day, nothing should distract us from what our goal is.

"Once we get over these injuries, we'll be able to show what we're about as a team. It's an opportunity to really implode and crumble, but that's not going to happen."