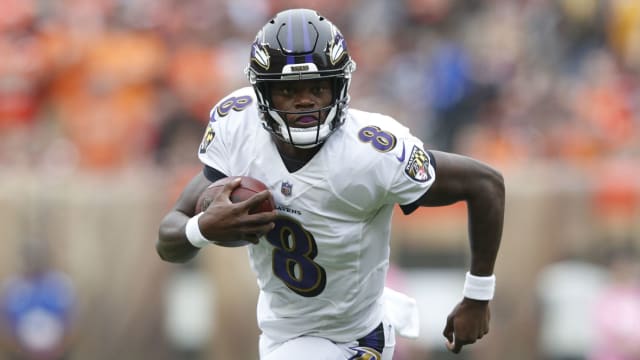 So much of the focus for Week 11 of the NFL season will be on a marquee Monday matchup as the Kansas City Chiefs visit the Los Angeles Rams.

While a battle of those two 9-1 teams has hogged much of the limelight, there are plenty of intriguing games on deck for Sunday's slate, including a meeting between the defending Super Bowl champion Philadelphia Eagles and one of the favourites to usurp them, the New Orleans Saints.

Here we look at some of the key Opta facts for seven of Sunday's biggest games.

Winners of three in a row, the Colts are second in the league with 26 passing touchdowns as a team this season with Andrew Luck back at quarterback. In 2017, without Luck, they were tied for last in the NFL with just 13 passing touchdowns. An underrated Tennessee defense will have a significant challenge slowing them down.

The Jaguars' hopes of returning to the AFC Championship Game look slim at 3-6. However, they won each of the two meetings against the Steelers last season, including a playoff meeting in the Divisional Round. On the other hand, the surging Steelers have won each of the last two games played in Jacksonville.

Ezekiel Elliott was dominant for the Cowboys in their Week 10 win over the Eagles, and the star running back could be in for another big day in Atlanta. The Falcons are giving up 5.2 yards per attempt on the ground this season. No other team in the league is surrendering more.

The Redskins' decimated offensive line faces an imposing test as they take on the Texans and star defensive end J.J. Watt, who now has 85 sacks in 97 career games. Only one player (Reggie White) has more in their first 97 career games.

Running back Alvin Kamara is enjoying another magnificent season for the 8-1 Saints. He has 28 total touchdowns over the first two seasons of his career, tied for the 14th most of any player in NFL history. Kamara needs eight more touchdowns to set the NFL record currently held by Edgerrin James (35). He will be confident of adding to his tally after seeing the Eagles fail to contain Elliott last week.

This primetime clash at Solider Field will be crucial in deciding the NFC North. Minnesota have beaten Chicago in three straight games. They have not beaten the Bears in four straight since a run between September 7, 1997 and December 6, 1998.