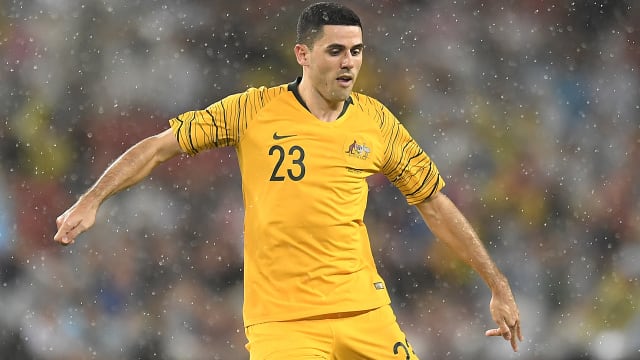 Tom Rogic and Robbie Kruse will miss Australia's friendly against Lebanon on Tuesday as they deal with minor injuries.

Rogic (knee) and Kruse (groin) were left out of a 24-man squad for the clash, which will be Tim Cahill's 108th and final appearance for the Socceroos.

The duo started Australia's 1-1 draw against South Korea on Saturday, when Graham Arnold's men needed a 94th-minute equaliser from Massimo Luongo in Brisbane.

"There is a short turnaround to Tuesday's match against Lebanon so Tom and Robbie, who both performed well on Saturday evening but have minor knee and groin injuries respectively, won't be risked," Arnold said in a statement on Sunday.

Graham Arnold has named a 24-player squad for our clash against Lebanon in Sydney on Tuesday night. #GoSocceroos

"Thomas and Dimitri did well in training in Brisbane but they won't be part of the Lebanon fixture.

"Our medical and performance staff will continue to monitor the group leading into Tuesday's game and together we will make a decision regarding the final 23 players for matchday on matchday.

"With limited matches and training days with the team leading up to next year's AFC Asian Cup it is important that we provide as many players as possible with the chance to integrate into our style and system, and Tuesday's match against Lebanon gives us a great chance to do that."