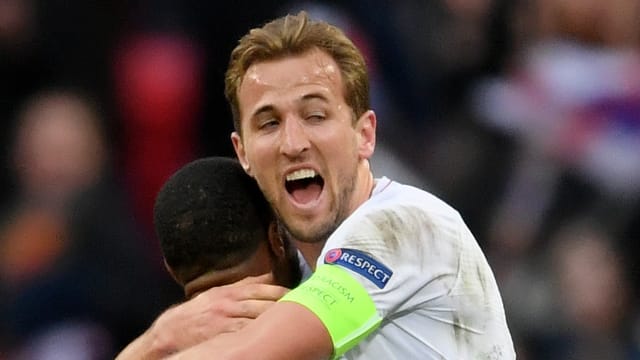 Critics of the Nations League were handed healthy helpings of humble pie after England and Croatia served up a thriller in their Group 4 decider, Harry Kane's late winner booking the Three Lions a place in the Finals.

The last 15 minutes at a raucous Wembley on Sunday matched anything international football has to offer with Kane knocking in his first goal since the World Cup - where his side lost to Croatia in the semi-finals in extra-time - to send Gareth Southgate's side through and the visitors down into League B.

Andrej Kramaric appeared to have kept Croatia on top in this new-found rivalry after his fine solo goal sparked delirious celebrations and put the Russia 2018 runners-up on track to stamp their ticket for the end-of-season tournament.

But substitute Jesse Lingard struck to level for England and set up a delirious climax that saw both teams miss chances to wrap it up, their breathless efforts in sharp contrast to suggestions from certain quarters that the Nations League would prove an irrelevant and unnecessary addition to the international calendar.

And Kane, whose six goals at Russia 2018 earned the England captain the Golden Boot, made the difference with a close-range finish ensuring the Three Lions earned a measure of revenge for their World Cup exit.

That the Wembley sound system pumped out 'It's Coming Home' on the full-time whistle will have proved particularly frustrating for Croatia, who made no secret of their annoyance at the anthem's use in Russia.

The prospect of Baddiel and Skinner blaring out seemed a distant one when Kramaric, who flopped in the Premier League with Leicester City, took advantage of slack marking to seemingly ensure his side would fight for cherished silverware again.

Kane, though, had other ideas with a goal and an assist in the space of seven minutes to turn the game on its head and give England a chance of winning their first international trophy since 1966.

747 - Harry Kane scored his first goal for England since netting against Colombia at the World Cup, ending a run of seven matches and 747 minutes without scoring. Timing. #ENGCRO pic.twitter.com/5EFReBOlVy

Portugal secured their Nations League qualification on Saturday despite the absence of Cristiano Ronaldo, with the remaining two spots in the Finals still to be confirmed.

Despite a gripping clincher at Wembley, it is fair to say the tournament has not been a complete success. An opening clash between Germany and France looked certain to get the competition off to a flyer, but proved a damp squib and ended goalless.

There is a clear feeling some countries - like Croatia and England - are taking it more seriously than others, with Germany coach Joachim Low in particular noting he is treating it as preparation for Euro 2020 - perhaps evidenced by Die Mannschaft's relegation to League B.

France, understandably, have also taken their foot off the gas after their success at the World Cup, with Netherlands' defeat of the world champions showing they are an emerging force under Ronald Koeman.

But for smaller nations, the launch of this tournament has been a chance to make history. Jurgen Klopp may have described the Nations League as "the most senseless competition in the world of football", but the Liverpool manager should speak to some Gibraltar players about what it means to them.

The minnows only played their first ever fixture in 2014 but recorded a maiden competitive victory away to Armenia last month. And they incredibly followed up that win with another at home to Liechtenstein three days later to spark wild celebrations around the Rock.

There was also a febrile atmosphere at Wembley on Sunday, with a pocket of Croatia fans making themselves heard throughout an entertaining but goalless first half.

And the noise from that block of supporters was ramped up a few notches as the entire Croatia side rushed to Kramaric to celebrate his superb solo strike, again rubbishing the claims from critics such as Klopp that the Nations League simply does not matter.

It matters to England too, though, Southgate's men racing to restart play after Lingard poked in a late equaliser to set up a grandstand finish that left Croatia unsure of whether to push for their own victory or try to hold on for a draw that would have relegated England.

And Kane showed his poacher's instinct to win it in the closing stages, England bouncing back in stunning fashion to keep their Nations League hopes alive.

Is it coming home for England? This time, it might just be.