I had to stop Kemba getting 70! – Jimmy Butler reflects on dramatic game-winner 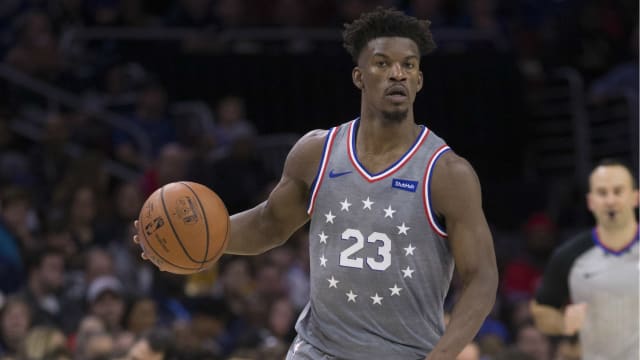 Jimmy Butler felt he had no choice but to make his dramatic overtime match-winning basket against the Charlotte Hornets in order to halt Kemba Walker's stunning 60-point performance.

Butler, playing in his third game for the Philadelphia 76ers since his trade from the Minnesota Timberwolves, hit a three-pointer with under a second remaining to give the 76ers a thrilling 122-119 victory on the road.

His winning shot ended an amazing display from Walker, whose total was comfortably the best by any NBA player so far this season, topping Klay Thompson's 52-point effort for the Golden State Warriors last month.

"To tell you the truth, in my head, as much as I wanted the shot to go in to win the game, I also wanted it to go in because I didn't want Kemba to give me 70! I just wanted it to stop at 60," a laughing Butler said to NBC Sports Philadelphia.

"I'm just so happy it went in. It was resiliency. In the end we stayed with it and stayed together. It felt great. I love the fact that my coaches and my team-mates had confidence me to make another basket, I can't thank them enough for that one. We play basketball the right way.

The game-saving block and the game-winning triple!

JIMMY BUTLER comes up huge for the @sixers down the stretch! #HereTheyCome pic.twitter.com/P47MLqcXQU

Prior to his game-winning shot, Butler blocked a Walker attempt with 18 seconds remaining and prevented the ball from going out of bounds, the Hornets star's claims for a foul ignored by the officials.

Butler added: "I didn't think [Walker] would settle for a jump shot in that moment. So he did what I wanted him to do [and drove to the basket]. I just got a piece of the ball."

"That was an incredible 20 seconds of Jimmy Butler," Philadelphia coach Brett Brown said of Butler's block and winning shot which helped move the 76ers to 11-7, before paying tribute to Walker.

"You have Joel [Embiid] and Jimmy in that situation a lot and he is doing that against two all-league defensive players. Sixty points in an NBA game against a pretty good defensive team is a remarkable effort."

Walker was visibly upset that his heroics had not let to a victory as the Hornets moved to 7-8.

"I'm still proud, that's an unbelievable thing to do right there," he said. "I'm just mad that we lost. I'm a competitor. It would have been even better with a win."