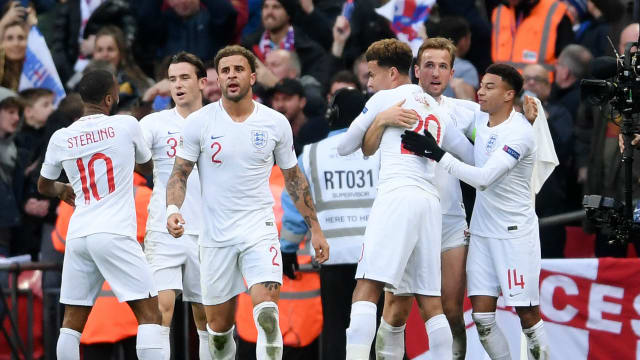 Harry Kane praised England's togetherness as the Three Lions came from a goal down to beat Croatia 2-1 and qualify for the Nations League Finals.

England went into Sunday's clash at Wembley needing a win to progress to the last four of the international competition or a goalless draw to avoid relegation, with the latter option wiped out when Andrej Kramaric opened the scoring.

That left Gareth Southgate's side needing two goals and substitute Jesse Lingard levelled things up after 78 minutes, before Kane slid home the winner with five minutes to play.

And England's matchwinner hailed the spirit with Southgate's squad to keep going against a side who beat them in the World Cup semi-finals in July.

"It felt good," Kane told Sky Sports. "The lads stuck at it, we showed our character, stayed calm and deserved to win.

"We were disappointed not to take our chances but against big sides you gave to stay calm.

"We said after the World Cup we want to keep progressing and get better - and the way to do that is by beating top teams. We finished the year strong. We'll enjoy this one.

"It's incredible, I've never seen Wembley like this in an England shirt. We want to make everyone proud. I know they'll enjoy this one."

This is how it feels to score the winner for @England at Wembley... #ThreeLions#Englandpic.twitter.com/Z8P89qjEJO

He then cleared off the line as Croatia pushed for a winner, a crucial intervention that enabled his captain to snatch victory and top spot in League A Group 4 in the closing stages.

"We kept the confidence, we kept the spirit and the togetherness that we'd taken from the World Cup and we brought it," said Lingard. "We were 1-0 down and winning 2-1 is a fabulous feeling.

"As a team we know our roles and responsibilities whether when you are starting or you are not on the pitch. I knew my role defensively and to get the box as an eight attacking, so credit to the staff for that.

"It's brilliant. I can only say well done to the lads and the staff. We stuck together through the highs and the lows and we'll now take it on to another semi-final."

England join Portugal as confirmed participants in the last four, with France or Netherlands set to join them from Group 1 and Belgium hoping to seal their place as Group 2 winners with a positive result against Switzerland later on Sunday.