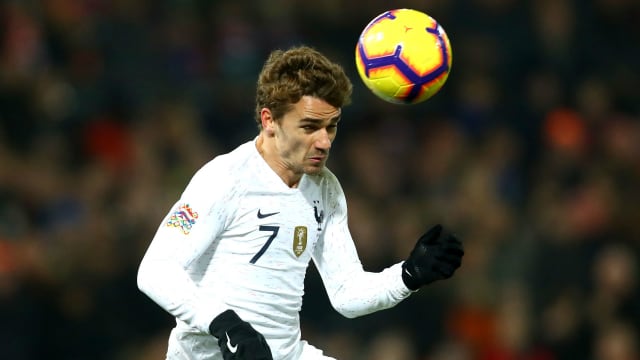 Antoine Griezmann has challenged France to swiftly bounce back from their Nations League defeat to Netherlands when they face Uruguay on Tuesday.

Georginio Wijnaldum and Memphis Depay scored to inflict a first defeat for Les Bleus since their World Cup success in Russia and, without a string of Hugo Lloris saves, the scoreline would have been more emphatic.

Griezmann, who played the full 90 minutes in Rotterdam, admits that France were out of sorts against the resurgent Dutch and is targeting a much improved display when Uruguay visit Stade de France.

"It was not our night," he told reporters.

"We tried to do our best, but we did not do enough to get through.

"Now we have another game in front of our supporters and, even though it is only a friendly, we must put things in order."

Not the result we wanted, but we'll be back!

Moussa Sissoko shared Griezmann's frustration at his side's performance, insisting that they need to ask some difficult questions of themselves ahead of the Uruguay clash.

"They dominated us in the duels. Our strength is being solid, and this was not the case. We need to understand why and quickly rectify it.

"We will have time to discuss with the coach and between us and we must rebound on Tuesday.

"This is not the face of the France team. We have lots of questions to ask ourselves."