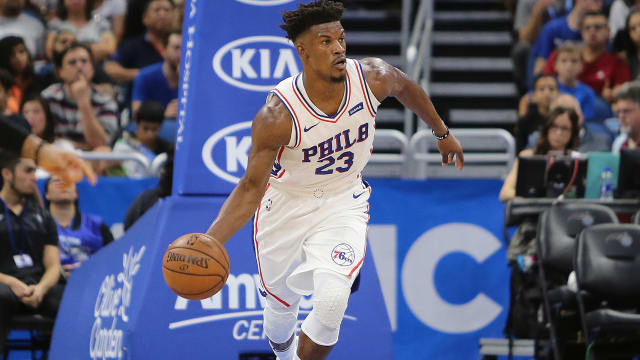 Kemba Walker played the game of his life, but Jimmy Butler stepped up to deliver victory for the Philadelphia 76ers against the Charlotte Hornets.

Walker scored a career-high and franchise-record 60 points, but in the game's final seconds, Philadelphia's own hero stepped up in Butler.

Playing only his third game with the 76ers, Butler buried the game-winning three-pointer in overtime to give Philly a 122-119 victory.

Butler had just moments earlier blocked Walker's shot with less than 20 seconds remaining to get Philadelphia the ball.

The game-saving block and the game-winning triple!

JIMMY BUTLER comes up huge for the @sixers down the stretch!#HereTheyComepic.twitter.com/P47MLqcXQU

The 76ers needed all of their stars firing on a night that belonged to Walker. The guard knocked down 21 of 34 shots and had seven rebounds, four assists and four steals.

In a nice coincidence, Walker's offensive explosion came on the same night he was honoured as a member of the Hornets' 30th Anniversary Team.

Anthony Davis scored 40 and had eight rebounds and assists in the Pelicans' 125-115 victory over the Nuggets.

Guard Spencer Dinwiddie hit only three of 16 shots, had four turnovers and fouled out of the Nets' loss to the Clippers.

Donovan Mitchell chased down Gordon Hayward to block his dunk.

The Warriors (12-5) are physically wounded (Stephen Curry is still out) and, to quote coach Steve Kerr, "banged up spiritually" in the aftermath of the Kevin Durant-Draymond Green spat. They lost a close game to the Mavericks on Saturday. The Spurs (7-7) and high-scoring guard DeMar DeRozan (25.6 ppg) might be catching them at just the right time, and at home.