WATCH: The baskets that moved LeBron James up the all-time NBA scoring list 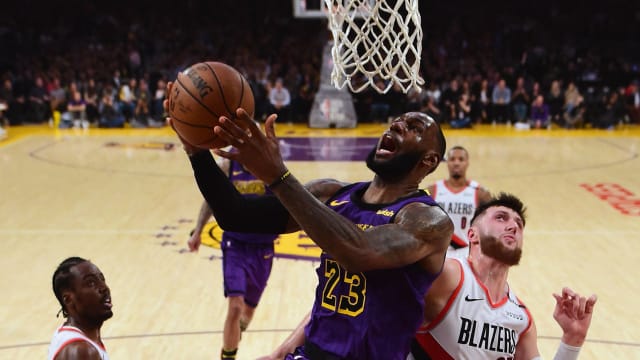 LeBron James has moved into the top five on the NBA's all-time scoring list.

The 33-year-old superstar passed Wilt Chamberlain when he scored his 31,420th career point in the Los Angeles Lakers' 126-117 win over the Portland Trail Blazers on Wednesday.

Here are the baskets that moved James up the all-time scoring rankings.

James, then a member of the Cleveland Cavaliers, broke the top 10 with a fastbreak lay-up against the Philadelphia 76ers in November 2016. "For me, scoring has never been on my list of goals," James said at the time. "Facilitating, getting my guys involved, and rebounding, defending, getting blocked shots and things of that nature [have] always ranked above that."

A little more than a month after entering the top 10, James tied Hayes on the list with a fadeaway mid-range jumper in the fourth quarter of a game against the Miami Heat. He followed with a lay-up a minute later to take sole possession of ninth place.

Moving ahead of Moses Malone

The bucket that did it. Congrats, @KingJames ! pic.twitter.com/M5xLXqHcNe

James blew by Chicago Bulls defender Michael Carter-Williams for an easy basket and the foul in March 2017. The lay-up and free throw helped him overtake his former Cavs team-mate and four-time champion Shaquille O'Neal for seventh on the career points list. "Shaq is an all-time great, and the most dominant player to ever play this game," James said afterwards. "Much respect, he's like a big brother of mine."

7 days from #KiaTipOff17 ... we flash back to @KingJames passing @SHAQ for 7th on the all-time scoring list! pic.twitter.com/Ds2VVKw8nn

Earlier this season, James, who left the Cavaliers and signed a four-year contract with the Lakers this offseason, jumped ahead of Dallas Mavericks great Nowitzki with a mid-ranger jumper against the San Antonio Spurs.

LeBron connects on the jumper to go to 6th on the all-time scoring list! #LakeShow #ThisIsWhyWePlay pic.twitter.com/28jc582wVP

James broke into the top five on the NBA's all-time scoring list with an and-one pull-up floater against the Trail Blazers.

He finished the match with 44 points and bumped Chamberlain down to sixth place.