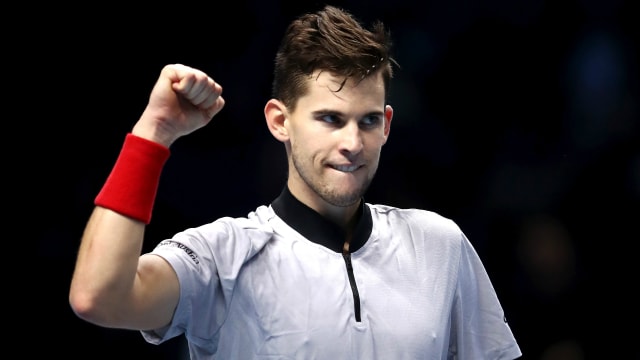 Dominic Thiem kept alive his chances of reaching the last four of the ATP Finals with a 6-1 6-4 win over Kei Nishikori on Thursday.

Only a straight-sets victory was enough to keep the world number eight in contention after defeats to Kevin Anderson and Roger Federer, and he duly obliged with an emphatic display at the O2 Arena.

The result means Nishikori now cannot reach the semi-finals, while Anderson is already through, regardless of his result against Federer.

Thiem can still progress, meanwhile, if Anderson defeats Federer in two sets and the Swiss star has a lower percentage of games won than the Austrian.

Nishikori needed just 68 minutes to defeat Thiem in their last meeting in Austria, but he was a long way short of the form he produced to down Federer so impressively in his opening match in London.

Thiem broke in Nishikori's first service game, the Japanese sending a forehand long after a fine rally, and he battled to a 4-1 lead after saving four break points.

Nishikori had looked a more confident player than the one that surrendered so meekly against Kevin Anderson last time out, yet he seemed to lose his cool after going 5-1 down with a double fault.

Thiem sealed the first set after 41 minutes with a forehand cross-court winner, prompting a furious Nishikori, who hit 24 unforced errors in the opening seven games, to smash his racquet to the ground twice.

Nishikori saved a break point to move 3-2 ahead in the second but Thiem made the most of his next opportunity, a thunderous backhand proving too much for his opponent to handle.

Thiem powered through some staunch Nishikori defending to consolidate the break at 5-3, and closed out a fine win in style, rasping a forehand winner to set up three match points before sending down an ace at the first time of asking.