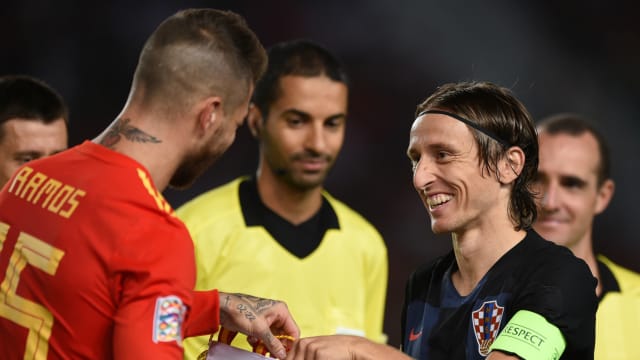 Lovren told Copa90 that Ramos' reputation is enhanced by his Madrid colleagues, saying "when he makes a mistake, he wins 5-1 or 5-2 and nobody cares".

After meeting up with Lovren at Croatia's training camp ahead of their forthcoming Nations League matches against Spain and England, Modric was asked about the Liverpool defender's spat with Ramos.

"Ramos is a great player and a great captain," Modric told reporters.

"In my opinion, all the criticism he has received is irrelevant. In football everyone has a very short memory.

"He has character and I am sure that criticism does not matter to him."

Now in his seventh season at Madrid and having spent four in the Premier League at Tottenham, Modric has played against many of the players Croatia will go up against in the Nations League.

He refused to be drawn on the question of which Spain players posed the greatest threat to the World Cup finalists but praised the impact former Barcelona boss Luis Enrique, who has won three of his four games in charge.

"I do not want to highlight anybody, they are all great players," said Modric.

"Luis Enrique has given them energy and now they play as a team, and there are also some very good young players.

"You do not have to be afraid, even if [you are up against] one of the best teams in the world."