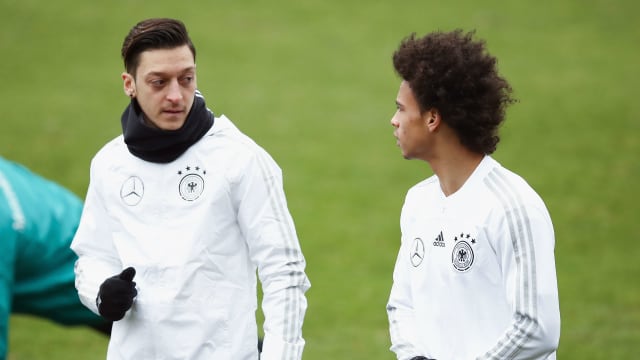 Leroy Sane said it was a "pity" that Mesut Ozil no longer plays for Germany after being asked about his former international team-mate by a fearless student on Tuesday.

The outburst came after the midfielder felt he had been unfairly targeted for criticism following his meeting in May with Turkish president Recep Tayyip Erdogan.

Germany held their media conference ahead of a friendly with Russia on Thursday at a school in Leipzig, with Sane put on the spot about Ozil's absence from the squad by a budding reporter.

"I would have liked to have played with him for a bit longer, as a footballer and as a good friend.

@LeroySane19 on his dream job: "It was always my dream to become a professional footballer actually. It's hard to say what I would have become instead...maybe a teacher " #DieMannschaftpic.twitter.com/1SUnZ1dJym

"Unfortunately, it is not like this anymore, but I think we have some more good players here, who I understand well and can learn a lot from."

Sane was not the only one to be asked an awkward question, with one student probing Manuel Neuer on his preference between Pep Guardiola and Germany boss Joachim Low.

Neuer, who played under Guardiola at Bayern Munich between 2013 and 2016, gracefully sidestepped the question, leaving Sane – who was signed by the Spaniard for Manchester City in 2016 – to deliver a diplomatic response.

"I think they are both very good coaches and both have already gained a lot of experience," he said.

"They both have their game philosophies and I think both have been very successful in recent years.

"I think it's really hard to say who is better."

Germany face Netherlands in the Nations League four days after their meeting with Russia.