It's just team spirit - Livingston not worried by Durant-Green exchange 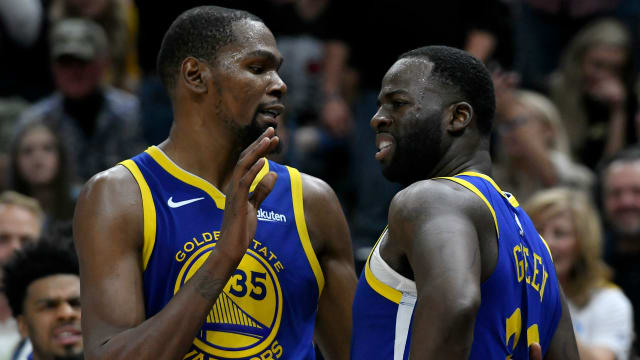 Shaun Livingston played down a heated exchange between Kevin Durant and Draymond Green, insisting it was good to see some emotion during the Golden State Warriors' overtime loss to the Los Angeles Clippers.

Durant recorded his first triple-double of the season - scoring 33 points to go with 11 rebounds and 10 assists - but the reigning NBA champions still went down to a 121-116 loss on Monday.

The Warriors produced a 19-5 run in the closing stages of the fourth quarter to tie the score at 106-106 but failed to get off a potentially game-winning shot on the final play of regulation when Green lost possession following a rebound.

Durant and Green, who was making his return from a sprained toe, shared words on the bench after the dramatic finish and while neither player addressed the media after the defeat, Livingston cooled talk of any issue between the pair.

"It's just team spirit. Guys wanted a different outcome to what happened," Livingston - back in action himself following a foot injury - told reporters after the game.

"Obviously, Dray [Green] had the turnover, and guys might have felt they were open or wanted the basketball but didn't get it.

"Things like that happen in the sport, but it was good to see some fire and emotion."

The Warriors were once again without Stephen Curry, who sat out his second straight game with a groin issue, and they struggled down the stretch once Durant fouled out after a reach-in on Montrezl Harrell.

"It was a tough night for Kevin and I just kept him out there because we're obviously a little short-handed with Steph out," coach Steve Kerr said.

"And I like to let guys play through fouls anyway. There were a few tough ones."

Harrell and Lou Williams impressed off the bench, finishing with 23 and 25 points respectively, to help the Clippers improve to 8-5 for the season.

Despite the defeat, Golden State remain top of the Western Conference with an 11-3 record.