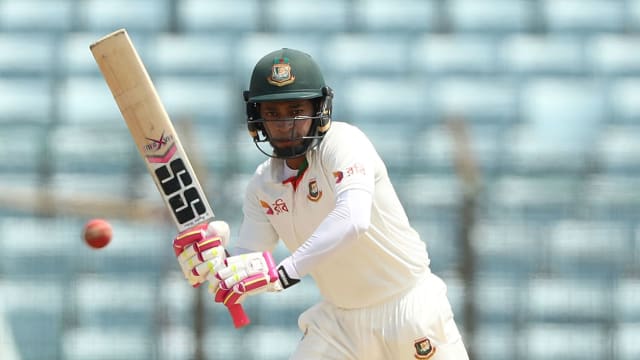 Mushfiqur Rahim crafted the highest Test score by a Bangladesh batsman with a magnificent unbeaten double century on a punishing day two of the second Test for Zimbabwe.

Wicketkeeper-batsman Mushfiqur made 219 not out after facing 421 balls in a marathon innings before Mahmudullah declared on 522-7 in Dhaka on Monday.

Mehidy Hasan made an unbeaten 68 as the Tigers piled on the runs, Mushfiqur surpassing Shakib Al Hasan's record score of 217 and becoming the first batsman to score a Test double hundred this year.

Kyle Jarvis took 5-71 but the tourists toiled in the field and were 25-1 at stumps after Hamilton Masakadza was dismissed by Taijul Islam.

Bangladesh, needing a victory to draw the series, resumed in a strong position on 303-5 after Mushfiqur and Mominul Haque (161) rescued them from 26-3 on day one.

Mahmudullah (36) and Mushfiqur scored slowly in a wicketless opening session and Jarvis got the breakthrough when the captain was caught behind just after lunch.

Jarvis had a third five-wicket Test haul when he got rid of Ariful Haque (4), but he was unable to remove the brilliant Mushfiqur and Mehidy.

Mehidy reached his half-century in style by creaming Sikandar Raza down the ground for six and Mushfiqur punched the air after bringing up his second Test double century with a pull for a single later in the over.

Zimbabwe lost bowler Tendai Chatara to injury and Masakadza edged Taijul to Mehidy in the slips for 14 after Mahmudullah declared on a painful day for Zimbabwe.