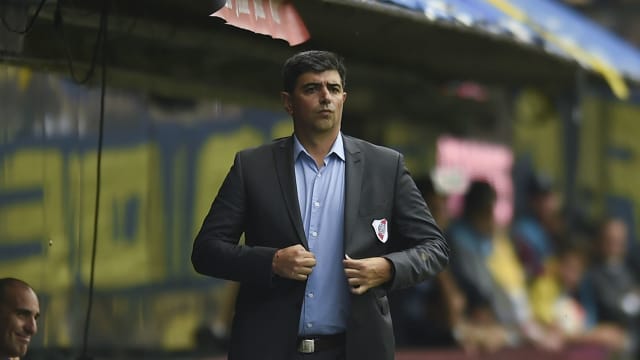 River Plate assistant Matias Biscay claimed it looked like the FBI had been to La Bombonera to ensure he could not communicate with suspended head coach Marcelo Gallardo.

Gallardo was prohibited from attending the opening match of the Copa Libertadores final against Boca Juniors after going into River's dressing room and communicating with Biscay via radio during the second leg of their semi-final against Gremio despite serving a touchline ban.

The head coach, who must watch his team's next three continental games from the stands, instead kept up to date with proceedings from El Monumental, where he was seen chanting on a balcony with fans after the 2-2 draw on Sunday.

Biscay said he felt uncomfortable attending the post-match news conference in Gallardo's place and revealed he had been unable to discuss the performance with his boss.

"I think I am in a seat I don't deserve. Marcelo should be seated here, and he is not because of an unfair penalty … and I must cover him here, but I do not feel comfortable because Marcelo is the manager and he should be here instead of me," said Biscay.

"I did not have the chance to talk with him yet, I think they installed phone signal jammers.

"It looks like the FBI came here so they make sure we won't be able to talk each other or get in touch. So we haven't been able to communicate yet."

Jonatan Maidana, who played for Boca between 2005 and 2008, was impressed by River's character as they twice fought back to earn a draw.

"We've got a very good feeling about this because the team didn't lose the focus, but we chased the draw and we got it from a hard rival," said Maidana.

"These games are like this, cup games are intense in both legs, and if you make a mistake you'll pay for it.

"This was a beautiful match. We came for the victory and we did not get it, but we are not disappointed with our performance at all."

The second leg is scheduled to take place at El Monumental on November 24.