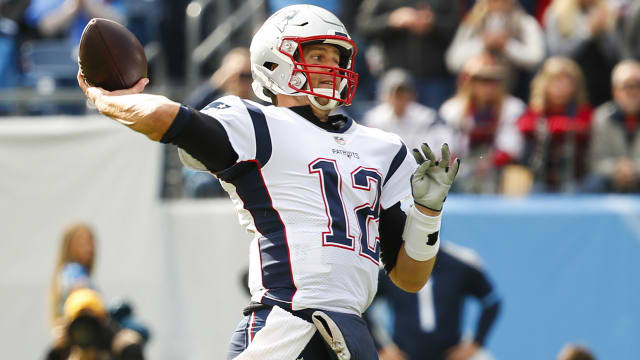 The New England Patriots and Atlanta Falcons were left searching for answers after surprise losses to the Tennessee Titans and Cleveland Browns respectively.

In Nashville, Marcus Mariota passed for 228 yards and two touchdowns and running back Derrick Henry rushed for 58 yards and two scores as the Titans thumped the Patriots 34-10.

The Titans' defense sacked Tom Brady three times and held the high-scoring Pats offense to 284 total yards. The Patriots fell to 7-3, while the Titans are 5-4.

In Cleveland, Browns rookie running back Nick Chubb rushed for 176 yards, added 33 more through the air and scored twice as the Browns upset Atlanta 28-16. He also provided the highlight of the day with a 92-yard TD run, the longest in franchise history.

Elsewhere, the two Los Angeles teams faced challenges but prevailed. In Oakland, Chargers quarterback Philip Rivers did not have a completion until the second quarter, but once he and running back Melvin Gordon got rolling, LA won 20-6 to improve to 7-2.

The Rams, who had never lost back-to-back games in the Sean McVay era, were close to doing so on Sunday when they hosted the Seahawks. Seattle quarterback Russell Wilson tried to engineer one of his famous fourth-quarter comebacks but fell short, going four-and-out on the final drive. Los Angeles (9-1) claimed a 36-31 victory to solidify their spot atop the NFC West.

Patriots receiver Julian Edelman injured his ankle in the team's loss to the Titans. He exited the game early and never returned. Other New England players that were injured in the contest were offensive tackle Trent Brown (back) and tight end Dwayne Allen (knee).

New Orleans left tackle Terron Armstead left the Saints' matchup against the Bengals after sustaining a shoulder injury during the first half. He was then ruled out of the game.

Raiders wide receiver Martavis Bryant was ruled out with a knee injury. A later report stated Bryant suffered a possible PCL tear, and will have an MRI to determine the severity of the injury.

A number of Packers were injured as Green Bay hosted the Dolphins. Safety Kentrell Brice left the game with an ankle injury, linebacker Nick Perry suffered a new injury, and guard Lucas Patrick was evaluated for a concussion.

Bengals cornerback Dre Kirkpatrick was unable to finish the game against the Saints after suffering a concussion.

Miami cornerback Bobby McCain was ruled out of the game with a head injury. Team-mate and receiver Jakeem Grant was carted off to the locker room with a leg injury. Fellow receiver DeVante Parker suffered a shoulder injury.

Rams wideout Cooper Kupp suffered another knee injury against the Seahawks and did not return.

Chiefs QB Patrick Mahomes threw for his 31st touchdown against the Cardinals, setting the franchise record for most touchdown passes in a single season, breaking a mark set by Len Dawson in 1964.

Falcons receiver Julio Jones became the fastest player in NFL history to reach 10,000 receiving yards. He reached the milestone in his 104th game.

The Redskins suffered a big loss to the Falcons last week. This time around, Washington were not going to be on the losing end. Linebacker Ryan Anderson attributed the win to a sense of urgency: "We got our [expletives] kicked last week, so everybody had a sense of urgency. That's what playing good defense is about. We let them make some plays, they hit us on some stuff. So, we had to just come out and respond. Bend, but don't break."