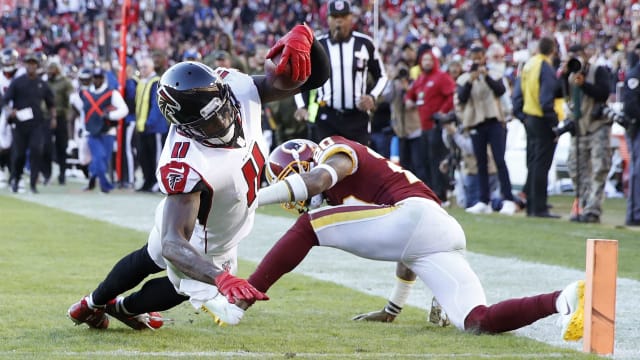 The NFL is entering its business end as teams jockey for playoff positioning during the second half of the season.

Several clear contenders have emerged across both conferences in the first nine weeks of the campaign, the New Orleans Saints, Kansas City Chiefs and Los Angeles Rams impressing alongside perennial superpowers the New England Patriots.

That quartet are all in action this weekend, and here we look at seven key Opta facts for Sunday's games.

You would think most teams would be in a position to succeed after a bye week of rest, but that has not been the case for the Bengals, who host the Saints and their juggernaut offense. Cincinnati are just 5-9-1 in games following a bye week since Marvin Lewis took over as coach in 2003. That is the fourth-worst record in the league during that time frame.

Atlanta wide receiver Julio Jones snapped a 12-game streak without a touchdown last Sunday. He has not caught touchdowns in back-to-back regular season games since Weeks 1 and 2 of 2016, the slumping Browns may be the ideal team to end that wait against.

The Patriots will be heavily fancied to beat the Titans and move to 8-2 on the season, and for good reason. New England have won five straight against Tennessee. The Patriots average 40.8 points per game in those games, conceding 16.4 PPG.

Chiefs quarterback Patrick Mahomes has thrown 29 touchdown passes this year. Only two quarterbacks have thrown more touchdown passes through the first nine weeks of a season – Tom Brady in 2007 (33) and Peyton Manning in 2004 (31) and 2013 (33). Illustrious company, and Mahomes will be expected to add to his tally against a dreadful Cardinals team.

Another Buccaneers shootout could be on the cards in Florida. Tampa have exceeded 400 yards in each of their home games this year and seven times since the start of 2017. They had eight home games of 400+ yards between 2011 and 2016.

The Raiders lost to the San Francisco 49ers 34-3 in Week 9, the second game they have been held to three-or-fewer points while allowing 25+ this year. No team has had more such games in their first eight matches since the Baltimore Colts in 1954. A trip to the Black Hole has never seemed less daunting for the surging Chargers.

The 3-5 Cowboys have lost three straight road games. They have not lost more than three straight on the road since dropping five straight between October 20 to December 29, 2002. Their division rivals the Eagles will relish the chance to change that at Lincoln Financial Field.