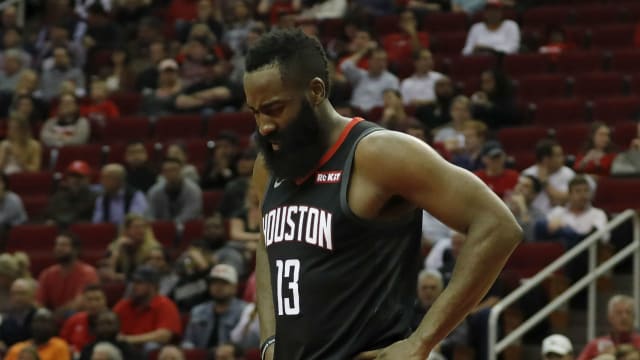 The Houston Rockets' offensive struggles continued in a loss to the San Antonio Spurs in the NBA on Saturday.

After a blowout loss to the Oklahoma City Thunder on Thursday, Rockets coach Mike D'Antoni lamented his team's offense this season.

The Rockets somehow shot the ball even worse in a 96-89 loss to the Spurs in San Antonio.

Houston shot just 33 per cent from the field, and 22 per cent (nine-of-41) from three-point territory. Yet the Rockets (4-7) hung around almost the entire game, thanks in part to 15 turnovers by the Spurs. The Spurs led by two at the half, and one after three quarters. Houston trailed by only one point, 86-85, with three minutes, seven seconds remaining before San Antonio pulled away, as the cold-shooting Rockets missed their next six shots from the field.

James Harden hit just one of his 13 three-point attempts, shooting seven-of-27 overall. But, the rest of the starters were almost as bad (nine-of-29 from the field).

Those numbers are a real problem for a team that was built on the premise of burying other teams under a flurry of three-pointers.

Meanwhile, the Spurs (7-4) continue their early-season success. LaMarcus Aldridge had a big game with 27 points and 10 boards.

LaMarcus Aldridge posts a double-double of 27 PTS, 10 REB as the @spurs improve to 7-4 on the season! #GoSpursGopic.twitter.com/pZhGWIGoAM

Mike Conley scored a season-high 32 points to power the Grizzlies over the 76ers in overtime, 112-106.

Clippers forward Montrezl Harrell had 26 points and nine rebounds off the bench in a win against the Bucks.

76ers rookie guard Landry Shamet hit only two of 13 shots from the field (one-11 on three-point attempts) and had two turnovers in a loss to the Grizzlies.

Lou Williams hit a spectacular game-winner in overtime for the Clippers.

LOU WILL WINS IT FOR THE @LAClippers! #ClipperNationpic.twitter.com/nMRq6UEccV