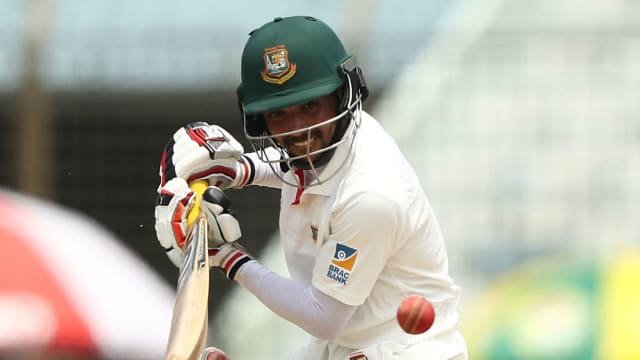 Centuries from Mominul Haque and Mushfiqur Rahim put Bangladesh in command after day one of the second Test against Zimbabwe in Dhaka.

Zimbabwe claimed their first Test win in over five years in the opening match of the series in Sylhet, but the Tigers responded impressively on Sunday.

Mominul made a magnificent 161 after being dropped three times and Mushfiqur was unbeaten on 111 when Bangladesh closed on 303/5 after being reduced to 26/3.

Kyle Jarvis (3-48) had Imrul Kayes caught behind and was further rewarded for an excellent opening spell when Liton Das chipped straight to Brandon Mavuta at midwicket.

Donald Tiripano struck another blow by removing debutant Mohammad Mithun for a duck, but Bangladesh's highest fourth-wicket Test stand of 266 put Zimbabwe on the back foot.

Mominul was dropped on nine, 25 and 120 as he made a seventh Test hundred, getting into full flow in the afternoon as chief aggressor with Mushfiqur ticking along at the other end.

The positive Mominul reached his century off 150 balls with a boundary off Sikandar Raza just before tea and Mushfiqur let out a roar when he reached three figures as the Zimbabwe bowlers continued to toil.

Tendai Chatara ended the stand with the second new ball, Mominul driving to Brendan Taylor at point and Jarvis had nightwatchman Taijul Islam caught behind in the penultimate over, but Mushfiqur was still going strong at stumps.