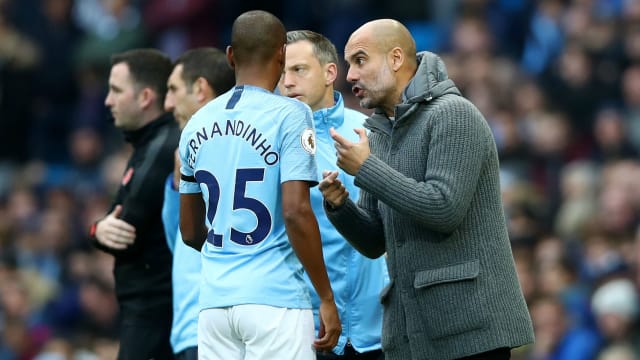 Fernandinho compared learning Pep Guardiola's system to a parent raising a child as Manchester City look to take another step in their defence of the Premier League title against Manchester United.

City are two points clear at the top going into Sunday's Manchester derby at the Etihad Stadium.

Midfielder Fernandinho has been the subject of lavish praise from Guardiola as City have gone from strength to strength, and the Brazil international explained the steps it has taken them to get to this point after going trophy-less in their first season under the former Barcelona and Bayern Munich coach.

"When you are a father, when you talk to your son or your daughter for the first time, they don't understand you," Fernandinho told The Telegraph. "Of course, you have patience and you keep talking to them and eventually they do understand.

"You tell them, 'You have to do this, you cannot do this' and, as they grow, they start to get it. Then, when they understand, they are no longer babies. They are growing up.

"That is what it is like with Pep. At first you don't understand. But then you grow up, you work and now we understand the things he wants much better. It's not like the first season when it took him more time to make us understand his ideas.

"Some players didn't understand immediately what he wanted. Everyone was learning. Now, it only takes a gesture from him and we understand. It has become easier.

"Everyone knows their role and what they have to do on the pitch. So, for example, if you are playing against a team with very fast, attacking wingers, we cannot go forward without someone – me – covering those players if the full-backs [Benjamin] Mendy and [Kyle] Walker have joined the attack."

"The responsibility on me is big but I feel great because I know how important I am for the team," he added of his own role in midfield.

"In my country, they used to call players who play in my position a defensive midfielder but it is not defensive. I try to win the ball high up the pitch to start attacks but it isn't just me.

"When the other team has the ball we are all under instruction to win it back. We defend with 10 outfield players. The key is to be compact going both ways, when we are attacking and defending, because this is how to keep control."