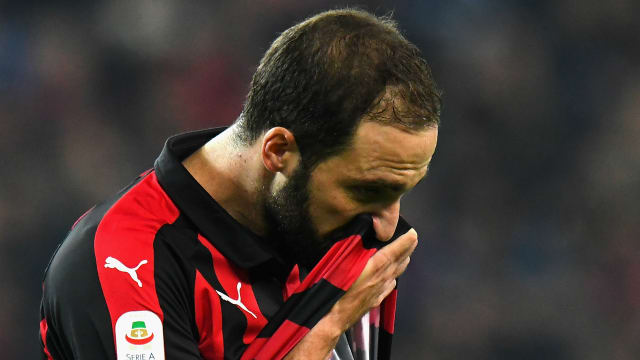 Gonzalo Higuain missed a penalty and was sent off in a nightmare meeting with Juventus as his woes cost AC Milan dear in a 2-0 loss at San Siro on Sunday.

Having overcome a back problem to start, Higuain - moved out on loan following Cristiano Ronaldo's arrival in Turin - might have wished he skipped the visit of his parent club after Wojciech Szczesny denied him from the spot in the 41st minute.

The champions had already established an eighth-minute lead through Mario Mandzukic and made the result safe thanks to Ronaldo's sealer nine minutes from time.

An incensed Higuain then rounded out his personal horror show by reacting furiously to a booking as Juve bounced back from their midweek Champions League loss to Manchester United.

Their clean sheet, and with it a six-point lead at the top, came despite Leonardo Bonucci watching from the bench at the ground where he spent a mixed 12 months.

Bonucci, who headed back in the opposite direction over the off-season, was surprisingly dropped to Juve's bench but Medhi Benatia proved an able replacement aside from his inadvertent part in the penalty.

Milan's confidence from a three-match Serie A winning streak was quickly eroded as Mandzukic climbed above Ricardo Rodriguez and met Alex Sandro's cross with a commanding downward header.

100 - Mario Mandzukic has scored the 100th Juventus’ Serie A goal in away games against Milan. Milestone. #MilanJuve

Their misery deepened just before the break with Higuain, who won the penalty via a VAR review of Benatia's handball, out-thought from the spot.

Szczesny instructed his former team-mate to shoot to the left and Higuain obliged, allowing the goalkeeper to make his second penalty save against the Rossoneri.

Ronaldo, quiet in the first half, forced Gianluigi Donnarumma into a smart stop soon after the restart, but he only had to wait until the 81st minute to get his goal from Joao Cancelo's pass.

And, after receiving a receiving a talking to from the referee, Higuain ranted his way into an early bath to cap a miserable night for himself and Milan.