F1 Raceweek: Vettel aims to bridge the gap and deny Mercedes at Interlagos 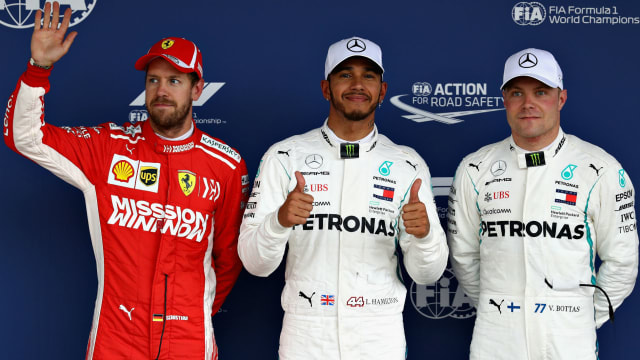 Ferrari's hopes of taking the constructors' title battle into the final round of the Formula One season suffered a blow in Brazil as Lewis Hamilton helped Mercedes reach a qualifying landmark.

Already crowned world champion with two races remaining, Hamilton secured his team's 100th pole position after a session during which he almost crashed.

The Briton narrowly avoided a nasty collision with Sergey Sirotkin - the Williams driver swerving out of the way at the last moment - during Q2, though he avoided any punishment from the race stewards.

Sebastian Vettel was not so fortunate, however, as he was fined €25,000 and issued with an official reprimand following an investigation into his actions while visiting the weighbridge.

The German at least avoided a grid penalty, meaning he will start from second in a race where Ferrari must outscore Mercedes by 13 points to deny their rivals scooping the team crown to go alongside Hamilton's individual triumph.

In the end, just 0.093 seconds split the front two on the grid. Vettel pushed hard in the closing stages but an eventful session for the German saw him come up agonisingly short.

It was not the only frustration for the four-time world champion at Interlagos, though, as a trip to the scales proved costly.

Vettel showed his impatience when instructed to visit the weighbridge, a decision that threatened to ruin his hopes of pole as rain began to fall, knocking over a cone on his arrival before banging his hands together in the direction of one official on duty.

The initial report released on the incident said he had not turned off his engine as required on the weighbridge, though the statement after the hearing made clear that was not actually the case.

"They shouldn't call us," Vettel told Sky Sports after qualifying. "When the conditions are changing like that I think it's unfair if somebody is pulled in."

He may feel a little better after avoiding a demotion, however, and his team's decision to start the race on soft tyres could make the difference.

BUILDING IN THE BRICKYARD

So now we officially know - McLaren will be in the field for next year's Indy 500 race, and Fernando Alonso will be their driver.

The Spaniard once again struggled in qualifying in Brazil, failing to get out of Q1, as his 17th and final F1 season continued to be an uphill struggle in a car unable to compete with the leaders.

Still, he was all smiles not long after the session when it was announced he will get the chance to complete motorsport's triple crown - a feat only previously achieved by Graham Hill - while working with his current employers.

The famous race at the Brickyard circuit is the last box to tick for Alonso, who has already triumphed at the Monaco Grand Prix (twice) and Le Mans.

"I'm especially glad to be returning with McLaren. This was always my first choice if the team decided to do it, so I'm delighted they've decided to go ahead," the two-time world champion said.

While the drivers' title race may be over, the potential for rain could at least add some drama on Sunday. There is a 60 per cent chance of precipitation in Interlagos, though temperatures will still be high, around 22-23C.