Embiid saves 76ers in overtime to down Hornets 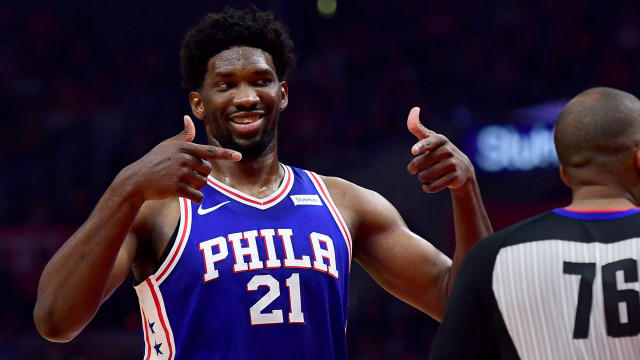 The Philadelphia 76ers blew a huge lead to the Charlotte Hornets on Friday night, but Joel Embiid stepped up in the end to save the game as they prevailed 133-132 in overtime.

Philly (8-5) appeared headed for an easy victory at home, leading by 21 points in the third quarter, but the Hornets (6-6) rallied behind Kemba Walker. The diminutive guard finished with 30 points, and while he was not very efficient shooting the ball (9-of-29 from the field, 3-of-14 from long range), he hit several big shots down the stretch to give the Hornets the lead late in regulation.

While Walker carried the Hornets to the brink of an incredible comeback win, Embiid took control on the offensive end. The Sixers big man scored 16 of his 42 points in the fourth quarter. He made all six of his free-throw attempts in the final two minutes of regulation, and hit arguably the biggest shot of the game, a three-pointer with 34 seconds remaining to tie the contest at 117.

Embiid then scored five points in overtime, including the free throw that turned out to be the game-winner, to seal the victory.

Embiid ended the night with a huge stat line, collecting 18 rebounds to go along with his 42 points. He helped save the 76ers from what would have been an embarrassing and disheartening loss at home. Instead, Philadelphia is still unbeaten (7-0) on their home floor. Ben Simmons also contributed 22 points, 13 assists and eight rebounds

Jazz light it up in Celtics win

The Utah Jazz were virtually unstoppable on the offensive end in a 123-115 win over the Boston Celtics, shooting 56 percent from floor. Joe Ingles led the way with 27 points, but Donovan Mitchell (21), Jae Crowder (20) and Rudy Gobert and Ricky Rubio (17 points each) all had big games.

Karl-Anthony Towns scored 39 points and hauled in 19 rebounds, but it wasn't enough as the Minnesota Timberwolves lost 121-110 to the Sacramento Kings. Detroit Pistons forward Stanley Johnson came off the bench for 22 points, seven rebounds and three steals in 24 minutes in a win over the Atlanta Hawks.

Although Nikola Jokic had 37 points and 21 rebounds for the Denver Nuggets in a 112-110 loss to the Brooklyn Nets, Nuggets guard Gary Harris hit only one of his 11 shots from the field and committed five fouls. Yet, Harris finished with a plus/minus rating a +6, the best of any Denver player in the game.

A timely bucket if there ever was one, Mo Bamba slams home the rebound, as the Orlando Magic held on in a 117-108 win over the Washington Wizards.

The Houston Rockets have won three of four games since opening the season 1-5, but there are still concerns. After a 98-80 loss to the Oklahoma City Thunder on Thursday, coach Mike D'Antoni told ESPN the offense is "anemic. I mean, it's bad." The Spurs have played well to start the post-Kawhi Leonard era, with DeMar DeRozan averaging 26.4 points and more than six rebounds and assists per game.