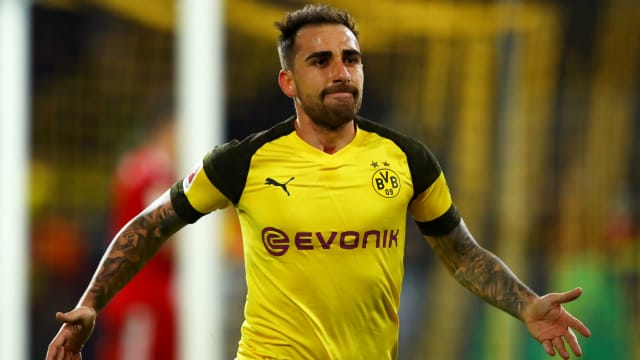 Paco Alcacer came off the bench to score a wonderful winner as Borussia Dortmund completed a stunning comeback to down Bundesliga rivals Bayern Munich 3-2 in a brilliant Klassiker.

Marco Reus twice cancelled out Robert Lewandowski goals, but it was Alcacer who struck the decisive blow in the 73rd minute at Signal Iduna Park on Saturday.

Dortmund had a four-point cushion to the Bundesliga champions heading into the clash and their seven-point gap will now give them real hope of a title challenge, although they were spared a last-gasp Lewandowski leveller by a correct offside call.

Bayern coach Niko Kovac insisted pre-match he was not feeling the pressure, but questions may again be asked about his future at the club after their six-game unbeaten run in all competitions ended.

Reus was recalled to the Germany squad this week and the Dortmund captain should have given the hosts an early lead, hitting a one-on-one chance straight at Manuel Neuer, who had conceded each of his last eight shots on target in the Bundesliga.

Dortmund started the second half in similar fashion to the first and equalised from the penalty spot in the 49th minute, Reus beating Neuer from 12 yards after being fouled by the goalkeeper.

But parity lasted only four minutes, Bayern retaking the lead with a breathtakingly beautiful goal.

Gnabry had space to shoot but instead backheeled a cute pass to Joshua Kimmich, the right-back's floated cross converted from close range by supreme poacher Lewandowski.

The Bayern striker had a hat-trick goal ruled out for offside while the champions rode their luck at the other end, Kimmich brilliantly clearing a Reus shot off the line before substitute Alcacer was halted by Jerome Boateng with the goal at his mercy.

Dortmund levelled again in the 66th minute, though, Reus connecting with a wonderful first-time finish to rifle home a right-wing Lukasz Piszczek cross.

And they snatched all three points as Bayern's high defensive line was stretched again, Sancho robbing Franck Ribery to start a move that saw Axel Witsel send Alcacer through to chip Neuer.

Bayern thought they had stolen a point in the 95th minute when Lewandowski steered a super backheel past Marwin Hitz, but the goal was rightly disallowed for offside.

18 – Dortmund have scored 18 goals by substitutes in all competitions this season, that’s at least ten more than any other team in Europe’s top 5 leagues. Quality. @BlackYellow#BVBFCB#Bundesligapic.twitter.com/obdGGGFWJ7

What does it mean? Dortmund genuine title challengers

Throughout Dortmund's flying start to the season, critics have suggested their position atop the table was down to a kind fixture list in the campaign's opening weeks. But having fallen behind twice they showed incredible maturity despite the youthful nature of their side. A seven-point cushion is far from decisive at this early stage of the season, but Bayern are in a title race for the first time in years.

Dortmund created enough chances to win a handful of matches, but until Alcacer's arrival they lacked a striker as prolific as the continually reliable Lewandowski. Alcacer scored the winner from his first opportunity and it is no wonder Dortmund reportedly want to turn his loan from Barcelona into a permanent deal.

Mats Hummels was replaced by Niklas Sule shortly before Dortmund's second equaliser, the Bayern defender having been given a torrid time by the league leaders. Sancho's rapid pace caused Hummels problems throughout and he appeared to hurt himself attempting to chase the flying England winger down. His substitution was an act of mercy from Kovac.

An international break provides both teams with a chance to catch their breath, with Bayern hosting Fortuna Dusseldorf on November 24 and Dortmund in action at Mainz on the same day.