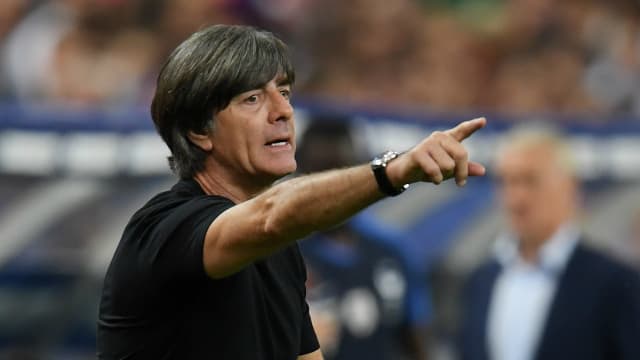 Germany are looking ahead to Euro 2020 as they face relegation from the top division of the Nations League, says coach Joachim Low.

After two defeats from their three Group A games, Germany are propping up the table and will be relegated if Netherlands beat France on November 16.

Germany have had a terrible 2018, with Low's men knocked out of the World Cup in the group stage despite the holders being among the tournament favourites.

Low has left out Jerome Boateng and Marc-Andre ter Stegen for fitness reasons and the Germany coach accepts he is already planning ahead for Euro 2020.

"Obviously we want to do all we can to stay in League A, but it's not in our hands anymore," Low told the DFB website. "We're looking at more than just the Nations League. Euro 2020 is our next main aim.

"Until then, we want to have a powerful team on the pitch once again. To this end, the qualifying games for Euro 2020 are obviously important for us, whether we're playing in League A or League B.

"I'm quite sure that they'll be a lot of changes before 2020, but they'll be well-planned and we won't do anything hasty. There's no reason to do that. We’ll find the right solutions and answers.

"The squad is always a snapshot between big tournaments; it's not set in stone. Not everyone who is playing currently will be on the pitch at Euro 2020 in two years' time."

Our 24-man squad for the international break

Joachim #Löw is only calling @ToniKroos up for the Netherlands game to give him more time to recover.#DieMannschaft#GERRUS#GERNEDpic.twitter.com/55A0xPyENm

While Boateng and Ter Stegen will sit out Germany's game against Netherlands in Gelsenkirchen on November 19, Marco Reus could make his return to international action four days earlier in a friendly against Russia.

The Borussia Dortmund star has scored six Bundesliga goals this season to fire his side to the top of the table ahead of Saturday's Klassiker against Bayern Munich and Low is pleased Reus has recovered from injury issues.

"I'm glad that Marco's finally hit a rich vein of form for Borussia Dortmund once again, of course," Low added. "He can also help the national side when he's in this form, that's what I'm anticipating from him. I hope that he can carry on playing like he is.

"Obviously I'm hoping that we can sign off well with two games in front of our fans after a difficult year. It's good that we’re playing both games in front of our own fans. We want to show the enthusiasm that we've been showing for years. We have to play well, especially against the Netherlands."