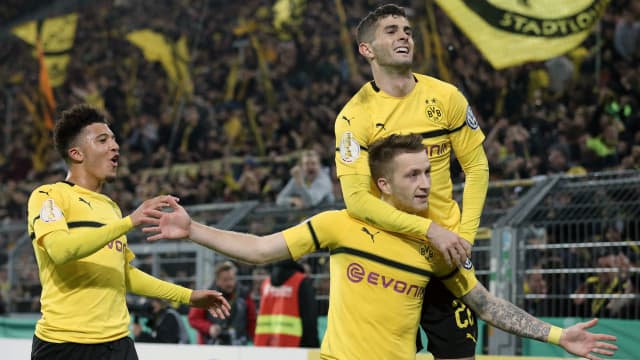 Christian Pulisic and Jadon Sancho can become two of the best wingers in the world, according to Borussia Dortmund team-mate Axel Witsel.

United States international Pulisic and England teenager Sancho have played starring roles for Dortmund in their excellent start to the season under Lucien Favre.

Sancho in particular has impressed, scoring four goals and laying on six assists in the Bundesliga to help Dortmund to top spot, where they sit four points clear of Borussia Monchengladbach and defending champions Bayern Munich going into this weekend's Klassiker.

Midfielder Witsel said of Dortmund, who he joined from Tianjin Quanjin in August: "We have a lot of new players and the way we are playing right now, usually it takes more time.

"I cannot explain why we are doing really well and this is good for us, and we will of course do our best to keep going like this.

"The coach, the message he gives to us, everybody listens to him, and this is important. The way we play now on the pitch is because of the players but also the message the coach gives everyday in training.

"[Pulisic and Sancho are] young but really talented. If they keep going like this, they can be – I will not say the best winger – but they can become one of, because they're really talented, but they need to keep working hard, and I hope we will keep them for a few years."

Dortmund thrashed Atletico Madrid 4-0 in the Champions League in October, though they lost the reverse fixture in Spain 2-0 on Tuesday.

Asked if Dortmund can do the same against Bayern at Signal Iduna Park on Saturday, Witsel replied: "Why not? In football everything is possible, so why not?

"Against Bayern if you want to win then you have to be on your top level, and if everybody is ready – 100 percent physically, technically and playing the football we are doing now – we can beat them."