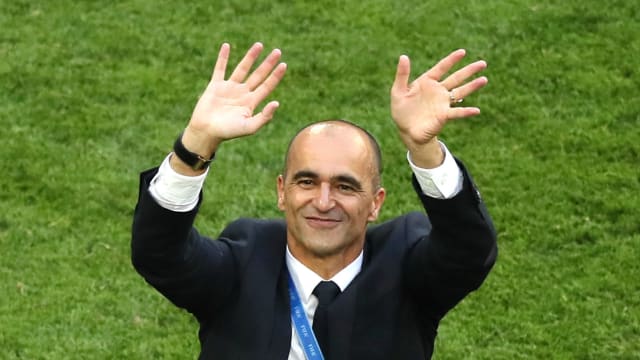 Belgium midfielder Axel Witsel understands why Roberto Martinez is being linked with the Real Madrid job but hopes he stays with the World Cup semi-finalists.

The LaLiga giants are searching for a new permanent head coach after Julen Lopetegui was sacked following a 5-1 Clasico thrashing at the hands of Barcelona last month.

Antonio Conte and Mauricio Pochettino are among the other coaches to have been linked with the vacancy, although interim boss Santiago Solari has strengthened his case with two wins from two games.

The Royal Belgian Football Association has said Martinez would not be able to join Madrid without the body's approval.

Witsel believes that while it would be a blow to lose Martinez, who led Belgium to a third-place finish at the World Cup, he can see why the former Everton boss is in the running.

"It is not surprising after all the great work we've done with him the last years and for the last World Cup," Witsel told reporters.

"It is not surprising to see a club like Real Madrid, if the reports are true, to be interested in him.

"No, we didn't call each other to talk about our head coach and Real Madrid. We'll all be together next week.

"As I said, we've done a great job so far and we keep doing it. All the players, we're all happy with the coach and his philosophy. If we lose him it would be a huge loss for all of us.

"If it is really the truth and he was meant to leave, he will be frank with us I think."

Having taken @BelRedDevils to a historic bronze medal, coach Roberto Martinez reflects on Russia 2018 while at the FIFA Football Conference  pic.twitter.com/gkPr9Hk4Yf

Martinez has yet to give any public indication whether he would want the Madrid job but Witsel feels any offer would be difficult for the 45-year-old to reject.

"I do think it would be," Witsel added. "It's like it would be for a player, they're Real Madrid!

"Head coaches are like players now. One day you're here and in six months, a year, two years you don't know.

"I personally hope he'll stay with us. If he leaves it would be his decision and that's it."