Dzeko can do more, but so can all Roma players - Di Francesco 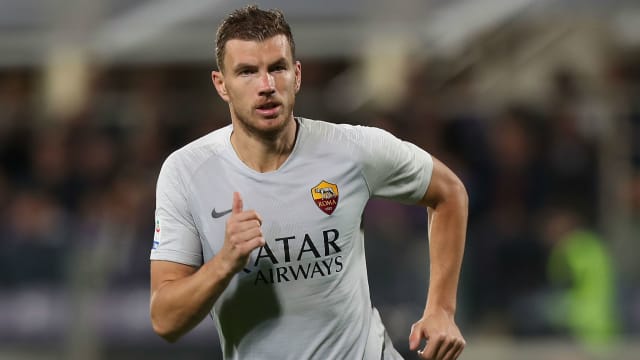 Edin Dzeko can "always do more" but Roma need to be more clinical as a team, according to coach Eusebio Di Francesco.

Roma on Wednesday claimed a 2-1 victory over 10-man CSKA Moscow to boost their chances of progressing from Group G in the Champions League, but Dzeko endured a disappointing outing in front of goal.

The Bosnia-Herzegovina international hit the target with just one of his five shots in Russia as the Serie A side needed goals from Kostas Manolas and Lorenzo Pellegrini to triumph.

Di Francesco felt Roma could have scored more than just two and believes the blame lies with the whole team, not just Dzeko.

"Edin can always do more because he is always dangerous. There were situations in which the team could've served him better," the Roma boss told Sky Sport Italia.

"Sometimes we can shoot and instead we pass. We must improve in this aspect, but we have so many young players that they'll improve with experience.

"It's a big result for us, but we could have done better at the end. We mustn't just settle for what we've got because we have the potential to do even more and I don't like us riding our luck."

Improve in Serie A, keep going forward in Europe...

CSKA drew level through Arnor Sigurdsson in the second half but a second yellow card for Hordur Magnusson effectively ended their hopes of securing an important point.

Viktor Goncharenko's side have now won just one of their past seven matches in all competitions and the coach refuses to get bogged down in their negative results.

Goncharenko said: "I wouldn't say we had a bad game. We were pressing well, attacking, had good spells, but looked too adventurous more often than we should have - especially after going down to 10 men.

"I wouldn't call it a crisis. Each game is a separate story. We need to be more consistent, but our team is young, which might be a reason for this situation."