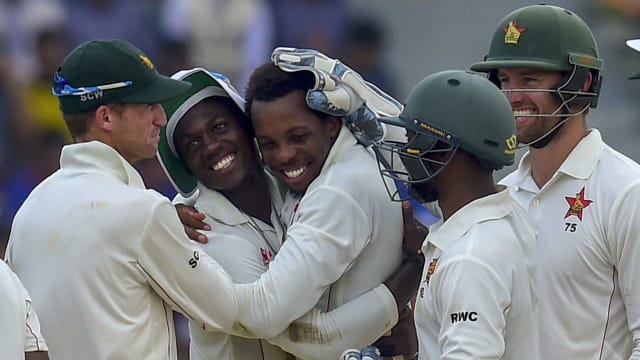 Zimbabwe recorded their first Test win in more than five years - and just their third ever away from home - as they bowled Bangladesh out on day four to take the series opener by 151 runs.

Resuming on 26 without loss at the Sylhet International Cricket Stadium, Bangladesh were dismissed well short of their tough target of 321, their last 10 wickets going down for 113 runs to finish on 169.

Leg-spinner Brandon Mavuta claimed 4-21 on his Test debut to help Zimbabwe secure their first triumph in the longest format since beating Pakistan in Harare in September 2013.

The hosts always faced a tall order after making just 143 in their first innings, though Liton Das and Imrul Kayes provided a solid platform in their chase by sharing a first-wicket stand worth 56.

However, following Das' departure for 23, the Tigers were torn apart by Zimbabwe's slow bowlers.

Off-spinner Sikandar Raza (3-41) dismissed both well-set openers, including bowling Kayes for a top score of 43, before seeing off home captain Mahmudullah (16) thanks to a catch by substitute fielder Craig Ervine at short leg.

The visitors register their first Test win since 2013 as they beat Bangladesh by 151 runs in Sylhet. #BANvZIM SCORECARD https://t.co/7DEQuatUUI pic.twitter.com/zr7IIM7aTd

Mavuta and slow left-armer Wellington Masakadza, also making his Test debut, combined to work their way through the rest of the Bangladesh order, with the hosts unable to stem the tide on a turning surface.

Ariful Haque provided some late entertainment with a breezy 38 from 37 deliveries but was the last man to fall, top-edging Mavuta for wicketkeeper Regis Chakabva to take a simple catch and allow Zimbabwe to celebrate a rare victory.

The two nations next meet in the second and final Test in Dhaka, with the game starting on November 11.