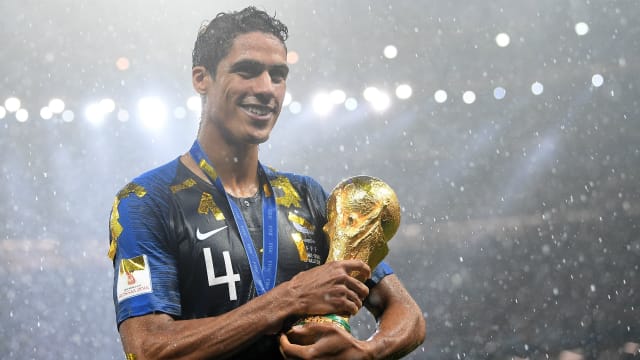 Raphael Varane says his France team-mates will be happy whichever of them wins this year's hotly contested Ballon d'Or award.

Real Madrid defender Varane has been backed by France icon Michel Platini for the prize after winning both the Champions League and the World Cup in 2018, the only player to do so.

Cristiano Ronaldo and Lionel Messi have won the award five times each in the last decade, while Luka Modric is also in the running after claiming the Golden Ball for his performances in Croatia's run to Russia 2018's final.

Varane, though, said he and his France team-mates have not talked about who could win this year's Ballon d'Or.

"I think there won't be a problem between us," the centre-back said to France Football, the publication behind the Ballon d'Or. "If a Frenchman wins it we'll be happy, whoever it is.

"It's in the news, but we don't talk about it. We speak about what was done well, but not [that] this one deserves it more than another. We all contributed. You can't say: 'He doesn't deserve it, he didn't work.'"

"We do a team sport. Individually, you're worthless! You can be a huge player, if you play alone, the team loses," he added. "All the teams that win a big trophy, it is thanks to the collective, when each one takes pleasure to share with the others. This is how it works.

"Basically, I played football to share with others, to excel together, to achieve a goal. After, we all have our ego, our pride and our personality. But all alone, in football, it does not work.

"I am a young old man. I really feel in the middle. I have a good feeling with everyone. I have responsibilities within the group, I am one of the most experienced, of those who must reassure others. I always had a bit of a big brother role. I have a rather fraternal side.

"I'm not the uncle, nor the youngest, I'm the brother. Ben Mendy called me Raphton. I thought I knew all my nicknames but he invented another one. He is inspired."