Griezmann: I am so pleased to play at Atletico Madrid 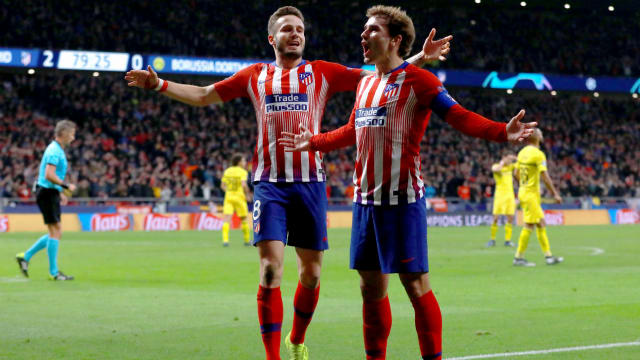 Antoine Griezmann reiterated his love of playing for Atletico Madrid after scoring his 20th Champions League goal for the club in the 2-0 win over Borussia Dortmund.

Diego Simeone's side were hammered 4-0 by Dortmund on matchday three, but returned to form in style at the Wanda Metropolitano on Tuesday.

Saul Niguez got them up and running in the 33rd minute and, after a series of quality saves by Roman Burki, Griezmann was on hand to wrap up the points late on.

And the France forward, who publicly rejected a move to Barcelona in the close-season to sign a new deal with Atleti, spoke of his adoration for the club he has played for since 2014.

"It's nights like these that I love and why I am so pleased to play at this club," Griezmann told UEFA.com.

"We really wanted to give them a game after they hammered us in Germany. We learned from our errors and have given a much better image of ourselves.

"We had important players injured and the side has responded, as it always does. This is Atletico."

Simeone, meanwhile, was delighted with the Frenchman's display, but insisted it was merely part of a superb team performance.

"He's in brilliant form. He was amazing last season, too," Simeone told a news conference.

"He saw how to do them damage and did it well, but it's not just him. The whole team were brilliant.

"We need to carry on the right track, which involves pressing and attacking directly; we've been doing that a long time and need to continue.

"I'm so pleased for how the side played: as a team. When everyone buys into that and carries it out, you have your identity. You feel what you do and today all the boys showed that."

Atleti are level on nine points with Dortmund at the top of Group A, and a win against Monaco – who are out of the competition – would guarantee their place in the last 16, although even a defeat would be enough should Club Brugge fail to beat Lucien Favre's side.

Dortmund, meanwhile, now switch their focus to the upcoming Der Klassiker against Bayern Munich, and Favre remained upbeat despite the Bundesliga leaders having suffered their first defeat of the season in any competition.

"It's a defeat, that can happen. It's just a football match," Favre said.

"They played very well defensively, they were very patient and very dangerous after winning the ball.

"We unnecessarily lost some balls and they did well on the counter. You have to be more patient and avoid giving away the balls like this. Having so much possession, that's positive, but we have to do more with this."