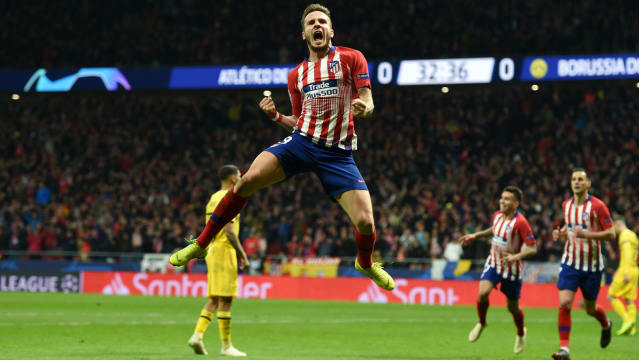 Atletico Madrid returned to form in Champions League Group A as goals from Saul Niguez and Antoine Griezman earned a 2-0 victory over Borussia Dortmund.

Dortmund's 4-0 rout on matchday three condemned Diego Simeone to the heaviest defeat of his Atleti tenure, but Los Rojiblancos got back on track in style at Wanda Metropolitano.

Saul's goal after the half hour – a crisp finish at the culmination of a slick team move – opened the scoring, and despite a string of superb saves from Roman Burki, Griezmann wrapped up the points with 10 minutes remaining.

Things might have been different had Raphael Guerreiro kept a close-range header on target, but Atleti were well worthy of a win that lifts them level on points with Dortmund at the top of Group A.

Despite a glut of Atleti pressure, Burki remained relatively untested until Saul broke the deadlock in the 33rd minute.

After winning possession in Dortmund's half, Saul exchanged passes with Filipe Luis before sending a first-time effort goalwards – Manuel Akanji failing to keep the ball out on the line.

9 - Saul Ñiguez has scored nine goals in the @ChampionsLeague , more than any other Spanish player since the start of 2015/16. Bravo. pic.twitter.com/S2N69nQKth

Dortmund were fortunate not to be further behind in the next 10 minutes, Filipe Luis and Griezmann finding Burki in top form, while Lukasz Piszczek's last-ditch tackle denied Saul a second.

Juanfran's pinpoint pass into Angel Correa looked to have set up a certain goal on the hour, but Burki's crucial touch turned the ball wide.

Guerreiro's introduction added balance to Dortmund's attack, and the substitute spurned the visitors' only true chance, heading over from Paco Alcacer's cross.

Griezmann showed no such profligacy at the other end, however, racing clear of his marker and keeping his cool to slot past Burki and make sure of a win that puts Atleti on the verge of progressing into the knockout stages.

What does it mean? Dortmund's yellow wall crumbles

Dortmund went into Tuesday's encounter as one of two teams to have kept three clean sheets in their opening three Champions League fixtures, but once the visitors conceded, their defensive resilience seemed to dissipate rather quickly.

Fortunately, Lucien Favre did have Burki to rely on, but the goalkeeper cannot be expected to be on such fine form in every appearance.

Handed a free role on the left in the absence of Koke, Saul certainly took his chance. His first goal of the season capped an all-action display, and his clever interplay with Filipe Luis provided a constant attacking outlet for Simeone's side.

Jadon Sancho has taken much of the limelight at Signal Iduna Park this season, with Christian Pulisic taking something of a back seat.

That again proved the case in Madrid, with Favre's brave decision to start both young wingers backfiring, and it was only when Pulisic made way and Sancho moved over to the right flank that Dortmund started to offer a threat.

Atleti are in LaLiga action against Athletic Bilbao on Saturday, with Bundesliga leaders Dortmund facing Bayern Munich in a huge Klassiker.