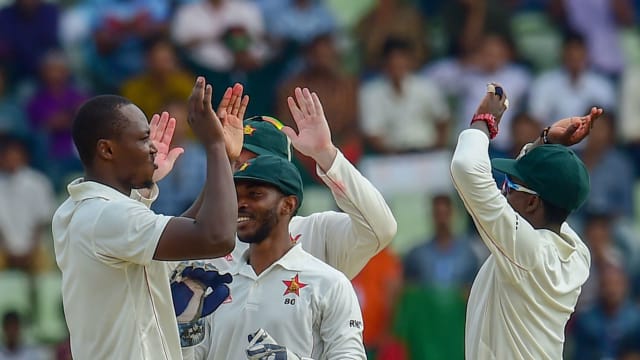 Zimbabwe seized control of the first Test with Bangladesh as they opened up a 140-run lead before bad light stopped play on day two in Sylhet.

Fourteen wickets fell on Sunday as Bangladesh failed to make an impression with the bat after taking the final four Zimbabwe first-innings wickets for just 46.

The tourists lost Regis Chakabva early in the day for 28, leaving Peter Moor (63 not out) to add what he could while the tail failed to wag.

Moor went past 50 off 145 balls but was quickly losing partners and Taijul Islam ripped through the lower order, the seamer finishing with 6-108 as Zimbabwe were dismissed for 282.

Bangladesh's reply was far from convincing as seamers Kyle Jarvis and Tendai Chatara reduced the hosts to 19-4 inside 10 overs, the latter claiming three wickets.

Only Mushfiqur Rahim and Mehidy Hasan Miraz provided support to the unbeaten Ariful Haque, the trio scoring 93 of their team's 143.

Jarvis removed Mushfiqur for 31 as he edged a short delivery behind to Chakabva, before Mehidy followed soon after as Sean Williams claimed a rare Test scalp.

Ariful was left stranded on 41 as Bangladesh were bowled cheaply, with Zimbabwe's second innings only seeing one run from two overs before light stopped play early.

And stumps comes two overs later, as the umpires deem the light is too poor to continue.

What a day for Zimbabwe! They are 1/0 in their second innings, leading by 140. #BANvZIM SCORE https://t.co/7DEQuaLwji pic.twitter.com/j3JnILKEQH