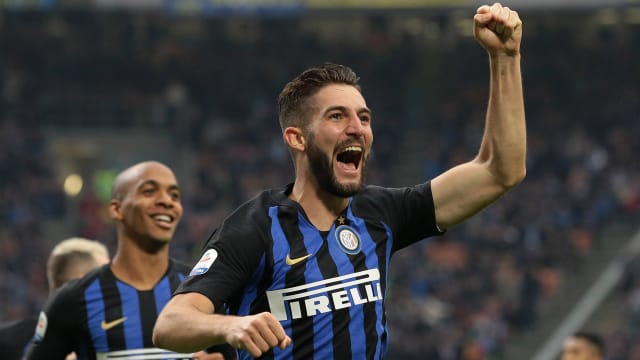 Inter warmed up for the visit of Barcelona on Tuesday with an emphatic 5-0 victory over Genoa at San Siro.

Two goals from Roberto Gagliardini, either side of Matteo Politano's strike, and late Joao Mario and Radja Nainggolan goals moved Luciano Spalletti's side back into second place in Serie A as they won a fourth home league match in a row for the first time in 12 months.

Inter's seventh top-flight win in succession came despite the likes of Mauro Icardi, Matias Vecino and Nainggolan starting on the bench, leaving them in good shape to face Barca in a key Champions League match next week.

Gagliardini put Inter ahead after only 14 minutes, pouncing on a loose ball in the box to prod home from six yards, with the goal standing after a quick check from the referee with the VAR crew.

Two minutes later, the home side had their second. Politano reached Joao Mario's pass ahead of his man and fired low past goalkeeper Ionut Radu for his second goal of the season.

Genoa showed a little improvement before the break but Inter put the result beyond question just three minutes after the restart, when Gagliardini blasted in after Radu had reacted brilliantly to deny Ivan Perisic.

Krzysztof Piatek was summoned from the bench and immediately headed straight at Samir Handanovic from a corner, but Inter's lead could have been greater had Joao Mario and Lautaro Martinez showed a little more composure on the break.

Genoa offered little else to threaten a late comeback, as their run without an away win against Inter stretched to 13 league games, and the Nerazzurri made the victory more one-sided with an injury-time flurry: Joao Mario turned into space and drilled past Radu left-footed from the edge of the box, before substitute Nainggolan headed in the Portugal midfielder's cross with the last touch of the game.

2 - @Inter have scored two goals in the opening 20 minutes with two different Italian players in a Serie A game, for their first time since April 1996 (vs Padova, goals scored by Branca and Carbone). Sprint.#InterGenoa

What does it mean? Inter back into second and ready for Barcelona

Napoli's win over Empoli on Friday had put a little pressure on Inter to perform here, and Spalletti's decision to rest Icardi, Vecino and two regular full-backs might have left a few fans fearful.

However, their performance was controlled and composed throughout, meaning they eased back into second place and three points behind leaders Juventus, having played a game more.

They should also feel reasonably well rested for the visit of Barca on Tuesday in a crunch Champions League encounter.

This was only Gagliardini's fourth Serie A start of the season, but it was a performance that might play him into Spalletti's plans next week. He took his goals well and was effective with and without the ball in midfield.

1 - Roberto #Gagliardini has scored his first brace in Serie A at his 69th appearance in the competition. Impact.#InterGenoa

Darko Lazovic's failure to clear promptly gifted Politano the chance to make it 2-0 to Inter, and it was a goal from which Genoa never recovered. Lazovic also completed just 62 per cent of his attempted passes, the lowest of any of his side's outfield players.

Inter turn their attentions to the visit of Barca on Tuesday, before next Sunday sees them travel to Atalanta in their final match before the next international break.

Genoa's recent tough run, which has included games against Juventus and Milan as well as the Nerazzurri, concludes with a clash with Napoli in a week's time.