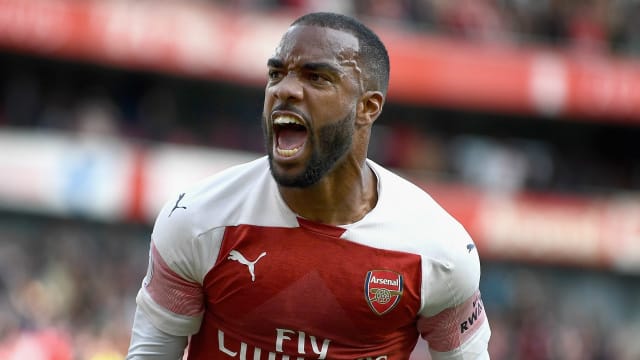 Alexandre Lacazette's fifth Premier League goal of the season grabbed a 1-1 draw for Arsenal in their pulsating Emirates Stadium encounter with Liverpool.

Liverpool spent significant periods on the back foot against their vibrant hosts, although Sadio Mane had a goal controversially ruled out for offside and Virgil van Dijk hit the post before captain James Milner clinically pounced on a Bernd Leno error after the hour.

Jurgen Klopp's side go back to the top of the table for now but will be two points behind Manchester City if the champions beat lowly Southampton on Sunday, while Chelsea can also go above them with three points against Crystal Palace.

Joe Gomez's last-ditch challenge deflected Pierre-Emerick Aubameyang's 14th-minute shot behind, while Sadio Mane was flagged offside at the other end when he tapped in after Roberto Firmino hit the post.

A combination of Bernd Leno and Shkodran Mustafi prevented Van Dijk from giving Liverpool a 23rd-minute lead when the centre-back stayed forward after a set-piece.

The frantic end-to-end feel continued, with Aubameyang dragging off target from Henrikh Mkhitaryan's backheel, before Mesut Ozil produced an impudent flick of his own from Granit Xhaka's chipped 39th-minute pass for Alexandre Lacazette to fire wide.

Replicating Alisson's earlier dart from his goal to disrupt a Mkhitaryan aerial attempt, Leno charged haphazardly into Van Dijk in first-half stoppage time and was relieved to see the defender's header bounce to safety off the upright.

Mkhitaryan passed up a couple of shooting opportunities as Arsenal resumed on top but Milner broke the deadlock, smashing home when Leno's fumble from Mane's cross deflected into his path off Rob Holding.

50 - James Milner's goal was his 50th in the Premier League - 14 of them have been for @LFC, more than any other club he's played for in the competition. Breakthrough. #ARSLIV

Leno partly atoned for that error by pushing over Van Dijk's 74th-minute header, by which stage Arsenal's earlier poise and threat looked to have dissipated. Lacazette had other ideas eight minutes from time.

What does it mean? Emery's men ready for Champions League push

Much was made of the relatively favourable run of fixtures across which Arsenal compiled a 13-match unbeaten run heading into the Liverpool encounter, but this performance bore little resemblance to the frantic mess of the defeats to Manchester City and Chelsea back in August. Unai Emery's Arsenal showed they can hang with top-class opposition.

A whipping boy when Arsenal fell short against Premier League heavyweights last season, Switzerland international Xhaka displayed all of his enviable array of qualities, often leaving Liverpool disorganised in central areas as a result. He broke up play judiciously, gaining possession 15 times without ever resorting to the rashness that makes for a weighty disciplinary record. Xhaka's passing range was to the fore as well over 90 minutes he appeared to enjoy, now freed from his recent toils as an emergency left-back.

Even allowing for some erratic Mkhitaryan contributions, Arsenal's outfit players were a credit to their head coach. The same could not be said for Leno. His challenge on Van Dijk might have resulted in either a goal or a penalty for Liverpool and the attempt to catch Mane's centre while at full-stretch could have been a game-settling howler.

Liverpool host struggling Fulham after their midweek Champions League trip to Red Star Belgrade, while Sporting CP and Wolves lend a Portuguese flavour to next week's schedule at Emirates Stadium.