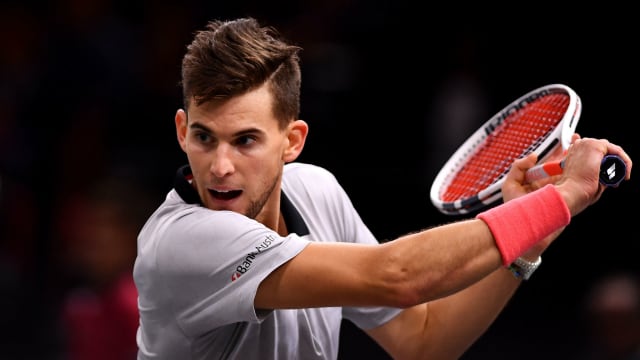 Dominic Thiem and Marin Cilic were both guaranteed places at the ATP Finals as Kei Nishikori was knocked out of the Paris Masters on Friday.

Thiem, eight in the standings, had beaten defending Paris champion Jack Sock earlier in the day to reach the semi-finals, but Cilic, one place higher, came up short against Novak Djokovic.

It mattered little, though, as Nishikori - requiring a win to reach London - was undone by Roger Federer in the late match of the day, sending the pair safely on their way.

Nishikori will now need to see if Juan Martin del Potro recovers from injury in time to take his place at the Finals.

Not only will Thiem play in London but he will do so with experience of a hard-court Masters 1000 semi-final.

The Austrian has consistently excelled on clay, but he showed his class on this surface by battling back from a set down for the second day running, beating Sock 4-6 6-4 6-4.

"It was a great fight," Thiem said. "For me, it's something special to reach the last four of a Masters - especially indoors, where I've had some troubles in previous seasons."

DJOKOVIC: I CAN PLAY BETTER

Djokovic will play Federer in the last four. Tennis fans will be thrilled but, while the Swiss fears few opponents, the prospect of Djokovic moving up a level from his superb win against Cilic might be a scary thought.

"I'm just pleased to be in the semis," Djokovic said afterwards. "I know I can play better."

Make that straight for @DjokerNole

Unable to reach London, Khachanov's focus in Paris this week is simply on getting as far as he can. It has worked out well so far.

After beating John Isner in a marathon match on Tuesday, the Russian took rather less time to down Zverev 6-1 6-2, with the German appearing to take offence to some of Khachanov's team as they reacted to an error.

"When you are losing, maybe you get p***ed or frustrated with some calls from somebody in the crowd," Khachanov said of Zverev. "Maybe he was p***ed that someone in my box screamed on his mistake and that was the reason.

"We are good friends outside the court and everything is fine. During the match sometimes you can't control yourself and you get frustrated by all these things."