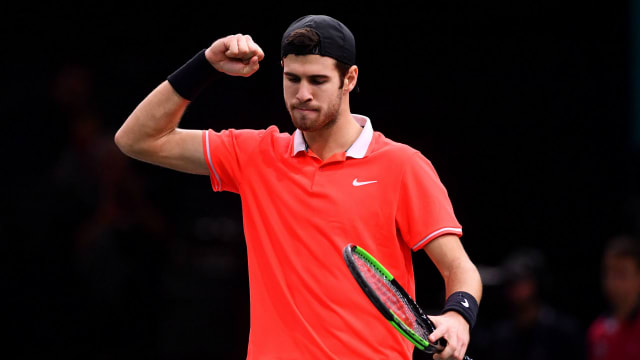 Karen Khachanov is the only unseeded player remaining in a glittering cast at the Paris Masters after upsetting John Isner on Thursday.

Russian star Khachanov came through one of Isner's trademark marathon matches as he triumphed 6-4 6-7 (9-11) 7-6 (10-8) to join the likes of Novak Djokovic and Roger Federer in the quarter-finals in France.

Djokovic benefited from Damir Dzumhur's retirement as he cruised towards victory, while Federer's bid for his 100th ATP World Tour title took him past the wasteful Fabio Fognini.

There will be heavyweight clashes across the draw in the last eight, with Djokovic's clash with Marin Cilic - who defeated Grigor Dimitrov - perhaps the pick of the bunch.

Khachanov had enjoyed a fairly straightforward route to this stage, seeing Kyle Edmund withdraw in the last 32 before lucky loser Matthew Ebden retired.

But that all changed in the meeting with Isner, who worked the Russian all the way before succumbing to a brilliant backhand down the line that had Khachanov collapse in delight.

Isner's slim hopes of reaching the ATP Finals are now over.

Life will not get any easier for Khachanov when he faces Alexander Zverev on Friday, the fourth seed having eased past Diego Schwartzman in straight sets.

Dominic Thiem is chasing a place in the ATP Finals, but his Paris hopes looked in doubt as he trailed Borna Coric after the first set.

Neither Federer not Fognini were at their best on Thursday evening, with the Swiss great claiming that the pair suffered for a lack of match action at the start of the week.

Both players made the third round without playing a match thanks to walkovers earlier in the tournament.

"You can't expect too much from what is basically the first round - myself and Fabio haven't played this week," Federer said. "When you've not played too many matches, the rhythm is a bit off. Both of us were far from our best."

He faces Kei Nishikori in the next round, with Kevin Anderson defeated in straight sets in the late match of the day.