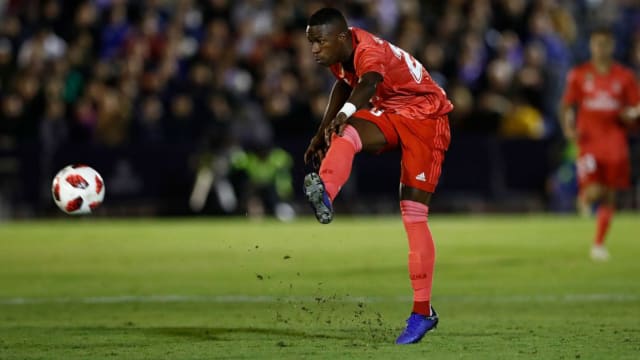 Goals from Karim Benzema, Marco Asensio, Alvaro Odriozola and Cristo Gonzalez gave the European champions a Copa del Rey first-leg victory that sets them firmly on course for the last 16.

Solari, placed in temporary charge following Julen Lopetegui's sacking on Monday, named a youthful side in the Spanish city in north Africa that included Vinicius Junior.

But it was two of the more established first-team stars that helped secure the win – just Madrid's second in eight matches in all competitions – and restored some sense of calm to a club thrown into turmoil in the aftermath of Sunday's 5-1 Clasico hammering at Camp Nou.

An attacking Madrid line-up that featured Benzema, Lucas Vazquez, Asensio and Vinicius was contained reasonably well by Melilla in the opening stages.

Vazquez did clip the crossbar with a fierce strike from long distance, though, and Benzema broke the deadlock 28 minutes in, tapping home after Odriozola sent in a low cross from the right.

The heavy rain and difficult surface made a passing approach difficult, but Vazquez was denied by a smart stop from Daniel Barrio after one fine move involving Vinicius and Asensio.

Vazquez spurned two further chances before Madrid finally got their second goal in first-half injury time, Asensio sweeping the ball into the bottom-right corner after being set up by Vinicius.

The impressive Brazilian hit the bar with a deflected effort after the break, but Odriozola made it 3-0 12 minutes from time when be smashed home from on the line after Vinicius had been denied.

Substitute Cristo added gloss to the scoreline with the last touch of the match, heading home after Odriozola worked space in the box following a corner.

What does it mean? Copa tie and morale boost in Madrid's grasp

Barring a monumental shock, Madrid's passage to the last 16 should be safely assured when they play the second leg early in December.

More pressingly, perhaps, this was a potentially tricky fixture in poor conditions that they navigated with assuredness, which will only help the morale of the squad following a difficult few weeks.

Whether it strengthens Solari's cause for the permanent job remains to be seen, but the youngsters involved on Wednesday will certainly be grateful to the coach for their opportunity.

Vinicius' path to the first team appeared to be blocked under Lopetegui, but he took advantage of this chance to impress, showing composure and skill on the ball that belied both his youth and the dreadful conditions.

Madrid's win could well have been more emphatic had Vazquez had his shooting boots on. Although unlucky to hit the woodwork, he spurned three simple-looking chances and seemed to let his frustrations boil over with a poor challenge on Ricardo Segura Martinez.

Madrid host the return leg on December 5 and will hope to build some momentum in the matches to come, with LaLiga meetings with Real Valladolid, Celta Vigo and Eibar up next, along with a Champions League trip to Viktoria Plzen.