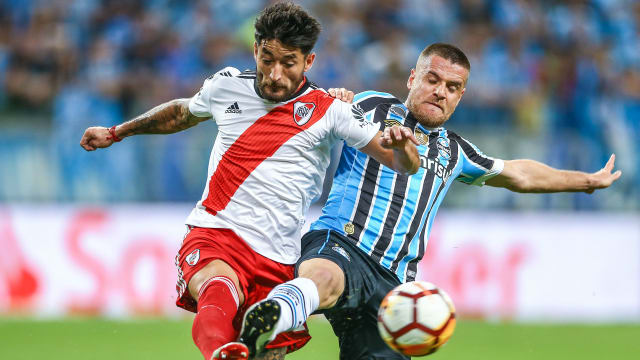 Gremio intend to appeal against their Copa Libertadores elimination at the hands of River Plate after Marcelo Gallardo admitted to breaking rules relating to his suspension.

Gallardo was banned from the touchline for the semi-final second leg in Porto Alegre due to his conduct in the opening match, which the Brazilian side won 1-0 at El Monumental.

However, the River coach was pictured communicating with his assistant Matias Biscay via radio from the stands and leaving the dressing room at half-time, both of which contravened disciplinary regulations.

After Leo Gomes put Gremio 2-0 up on aggregate in the first half, Rafael Santos Borre equalised on the day in the 82nd minute, though Gremio coach Renato Gaucho felt it should have been disallowed due to handball.

Referee Andres Cunha then showed Bressan a second yellow card for blocking Ignacio Scocco's shot with his arm inside the box after reviewing footage, and, almost 10 minutes after the initial incident, Gonzalo Martinez converted the 95th-minute penalty to send River through on away goals.

However, defending champions Gremio plan to try to get the result overturned.

"A regulation was violated and we will make a formal appeal to CONMEBOL," Gremio vice-president Duda Kroeff told Toda Pasion.

"Until last night [Tuesday] we thought we could not do it, but now we know we can. Our legal department will meet to present the appeal to CONMEBOL.

"We will appeal against the game and wait for what is decided.

"We are angry at what happened and we know that CONMEBOL was also very upset. We have 24 hours to present our case."

Gallardo showed no remorse for flouting the rules and said being forced to miss the final would not bother him.

"I took the decision to go down at half-time to talk to the players because I thought they needed it. Maybe I broke a rule, but I take responsibility. It was what I felt I had to do, I do not regret it at all," said Gallardo.

"It is outrageous not to have the possibility and the freedom to work. I do not care if I miss the final, if so, so be it.

"I was not going to be deprived of being in the locker room at the time when the players needed it the most."