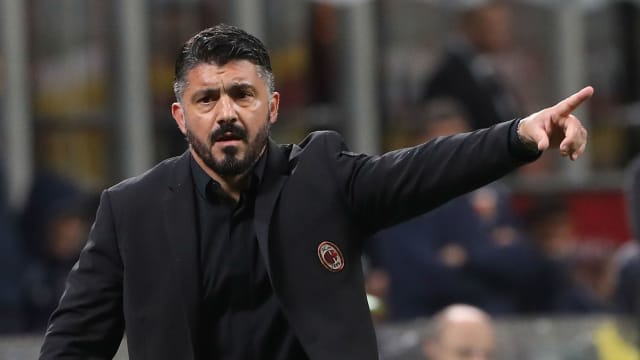 Gennaro Gattuso has urged his side not to get carried away after a last-gasp 2-1 triumph over Genoa on Wednesday lifted AC Milan up to fourth in Serie A.

Questions were raised over Gattuso's future as Rossoneri head coach after a 1-0 derby defeat against Inter 10 days ago, but the 40-year-old has now steered his side to back-to-back victory to lift them into the Champions League qualification positions.

They looked destined to only get a point after Alessio Romagnoli's unfortunate own goal cancelled out Suso's early opener.

There was a late twist in Milan's favour, though, as Romagnoli took full advantage of a weak punch from Ionut Radu to hook a superb first-time volley over the stranded goalkeeper in stoppage time.

Gattuso preached caution after the win and has challenged his side to prove they belong in the upper echelons of Serie A.

"The victory has allowed us to reach fourth place, but this is just a first step," he told a news conference.

"We now have to demonstrate that we can remain in that position.

"We made things complicated by conceding an incredible goal but being able to bring the victory home is a good sign.

"I continue to do my job and what we've been through is a good sign."

Romagnoli went from zero to hero with his dramatic late winner and believes Milan are being overly criticised for their start to the season.

"We deserved the victory," he told Sky Sport Italia. "We played very well.

"I'm sorry for my own goal. I was unlucky, but I made up for it. In my opinion, we've been criticised too much.

"The results are what count and we got another. We must improve and stay near the top."