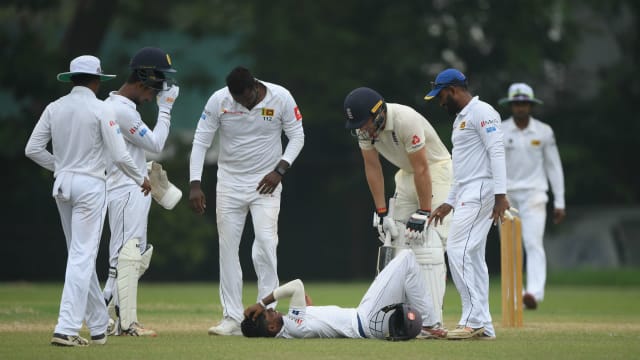 Jos Buttler "feared the worst" for Pathum Nissanka after he took a blow in England's disrupted tour match draw with a Sri Lanka Board XI, where Ben Stokes also suffered an injury scare.

Nissanka was fielding at short leg when Buttler struck his helmet, with the players immediately concerned for the young Sri Lankan's welfare.

Having been taken off on a stretcher, Nissanka regained consciousness and was taken to hospital for precautionary scans.

Meanwhile, Stokes suffered a bruise to his arm and retired early, while captain Joe Root hit a century, but Buttler's focus was on Nissanka.

"You always fear the worst, I think," said the England batsman. "I hit him very hard and straight in the middle of the helmet.

"Luckily, the medics rushed straight on and treated him and it's good to hear he's doing better. It is always a thankless position to field at short leg and, unfortunately, these things can happen and we just hope he's not badly hurt.

"You don't really care about getting out, you just hope the lad is OK. From yourself hitting it, I knew I had hit it pretty hard and straight away you're worried about the guy."

The first Test with Sri Lanka gets under way on Tuesday.