Real Madrid sack Lopetegui: Where it went wrong at the Santiago Bernabeu 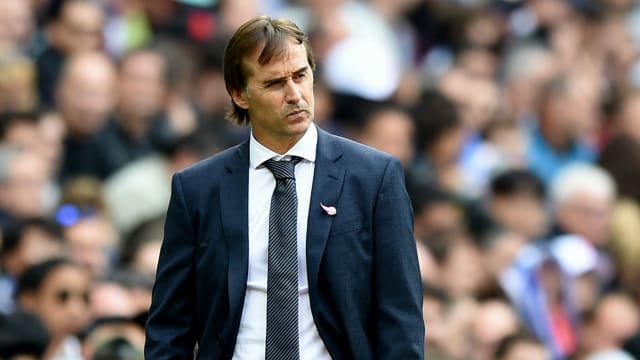 Lopetegui was contentiously appointed ahead of the World Cup and tasked with replacing three-time Champions League winner Zinedine Zidane, but he fell well short of the Frenchman's standards.

A tough stint began prematurely as Spain sacked their coach for agreeing the switch, while his first competitive game in charge saw the European champions beaten 4-2 by rivals Atletico Madrid.

Lopetegui's time in charge came to an end with a 5-1 hammering by Barcelona in El Clasico that leaves them in ninth place, seven points behind the champions.

Having been handed the unenviable job of tackling a packed Madrid agenda in pre-season, things really did not go to plan. We look at the failed tasks that cost Lopetegui.

SETTLE THE FUTURES OF KEY MEN

Task: With Cristiano Ronaldo and Gareth Bale openly discussing possible moves, Lopetegui needed to find a solution with both players that would work in Madrid's favour.

How it panned out: Perhaps Lopetegui's biggest issue was Ronaldo departing before his reign was even up and running. A transfer to Juventus left Madrid without their talisman and short up front. Bale stayed and initially impressed but was very poor against Barca. The next man in at the Bernabeu will have the same problem.

KEEP ZIZOU'S REGULARS ON SIDE

Task: An all-star side had to keep performing regardless of Ronaldo's future. Karim Benzema - popular with Zidane, despite not always convincing - would be the subject of a big Lopetegui call, too.

How it panned out: Ronaldo's absence may not have been so keenly felt had other stars not floundered. Sergio Ramos turned in a number of shaky displays - including in the Clasico drubbing - while Luka Modric appeared distracted and Toni Kroos flopped. Benzema remained, was left without serious competition and, after a pair of early LaLiga braces, contributed to an astonishing goal drought.

BRING IN A WORLD-CLASS GOALKEEPER

Task: After years of links to Thibaut Courtois, David De Gea and the like, would Lopetegui finally ditch Keylor Navas and bring in an elite performer in goal?

How it panned out: Courtois did arrive, but the coach dithered as Navas briefly kept his place and then continued to play the Champions League games. While hardly a major problem, Lopetegui's failure to decisively deal with the issue perhaps summed up this dreadful spell in which he could not stamp his authority on the squad.

Task: Leading a young Spain side into the World Cup as genuine contenders, the hope was that Lopetegui could coax brilliance from Madrid's exciting cast of prospects.

How it panned out: Not only was Lopetegui denied the opportunity to coach his country in Russia but poor results at the Bernabeu meant he was also robbed of the time to develop young players. Theo Hernandez was sent out on loan and Vinicius Junior remains a fringe man. Dani Ceballos and Marco Asensio were handed starting roles but did not grasp their opportunity.